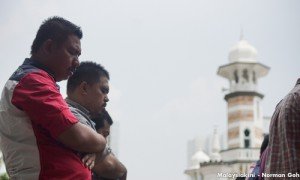 For years, the race-based and religion-based parties in Malaysia, namely Umno-Baru and PAS, warned Malays that they needed protecting and Islam needed defending.

Concerned Muslims, who felt that their faith was under threat, believed the spin of the Umno-Baru and PAS politicians. These politicians use religion like women use cosmetics; in other words, their faith is only skin-deep. Religion acts like a woman’s foundation, to cover flaws.

The only threat to the Malays and Islam, comes from the Malays themselves. Islam does not need any defence. It has been around for several hundred years, it can survive several more.

The myths that have been used to con Malays are debunked below.

1. The cross will make you a Christian – MYTH

Looking at the cross on the roof of a church, the wall of the chapel, on a school badge, a football jersey, Bible or car emblem, will not turn Malays, Buddhists, Hindus or atheists into Christians.

If it did, the man responsible would be a zillionaire because of the commercial possibilities of making people like a particular product, just by looking at it. Even Jesus would have welcomed such a technological innovation, and saved countless lives and enmity. The only time a cross will cause an upset, is when one consumes too many hot-cross buns and gets indigestion.

2. The word ”Allah” in the Malay Bible will convert the Malay – MYTH

Malaysian Christians in peninsular Malaysia were banned from using the word ”Allah”, because it would confuse Malays and make them convert to Christianity. The only outcome from this ban was to create bad blood between east and west Malaysians, and stir the flames of secession. The other outcome was to make the Malaysian mullahs a laughing stock.

If a Malaysian cannot understand nor speak Malay, he is criticised. If the bumiputera, for example Ibans, were to pray in the national language – Bahasa Malaysia, he would be condemned. It appears that the national language and Article 11 of the Malaysian constitution are not compatible. At least that is what the Umno-Baru and PAS politicians would like you to think.

The only fact, is that Article 11 does not apply to Malays.

4. The Malays will be wiped out – FACT

Illegal immigrants and migrant workers, who are Muslim, are given voting rights in exchange for working rights and the right of abode in Malaysia. The only proviso is that they vote for Umno-Baru in the general elections.

When someone who is not Malay becomes Muslim and speaks Malay, lives like a Malay, wears the baju kurung or baju Melayu, eats nasi lemak, and despite being born a non-Malay, calls himself Ridhuan, or Abdool Kareem, and acts more Malay than Malay, the chances are that the Malays will be wiped out.

5. The DAP influence will result in a loss of Malay culture – MYTH

Umno-Baru paints a picture of the DAP as Bible-bashing born-again Christians, Chinese, communists and gullible Malays, who want to turn Malaysia into a Singapore satellite. The DAP influence will supposedly result in the loss of the Malay culture. We cannot ignore the fact that the Saudi petrodollar and Wahhabi influence has made Malays into poor copies of Arabs. Ironically, the Arabs despise all non-Arab Muslims.

6. Sex is the preserve of the non-Muslims – MYTH

Despite their supposed puritanical teachings, some mullahs, in Malaysia have produced their own version of the Kama Sutra, the ancient Hindu Sanskrit text which offers practical advice on sexual intercourse. The Malaysian version, which is called the Kama-Putra, includes advice on how to have sex with your wife when riding a camel. It also gives advice on the best ways to ride a camel.

7. There is equality between the sexes in Islam – MYTH

Malaysian mullahs prefer to preach politics, whilst Malay politicians desire to become clerics. They have an insatiable delight in telling Malays and Muslims to prepare for the afterlife. They ignore the suffering of the poor, the effects of corruption on the rakyat, measures to mitigate flooding and the punishment of incestuous Malays.

Concentrating on the rituals of Islam, like wearing the hijab and walking 10 paces behind the husband, will reward the man with 72 busty virgins, in heaven. Despite repeated requests, the mullahs have not mentioned how the Muslim woman will fare in Heaven. Perhaps, she will be given 72 assorted brooms, mops, dusters and dishcloths to keep a heavenly home.

8. Going to the cinema will encourage immorality among youth – MYTH

Harussani Zakaria, the Perak mufti, should take a trip to London, Paris or the French Riviera where many elderly Malay datuks enjoy dirty weekends, with their young mistresses. She wears skimpy clothing, and both frequent the gaming clubs and are often seen sipping champagne, whilst the wife, left in Malaysia, thinks her husband is on a very important business trip and must not be disturbed.

The Malay clerics should emulate the diet of the Jains, and not eat onions and garlic. Jains believe that these bulbs increase sexual desire. Overworked Malay clerics, whose diets seem to consist of dishes with onions and garlic have wild imaginations. When most people see an athlete in the sporting arena, it is her performance which enthralls; Malay mullahs only see legs opening and closing, and following Harussani’s advice, focuses on the camel toe.

10.The PAS leadership say that wives of MPs who remain loyal to PAS, will be divorced, automatically, if their husbands quit the party – MYTH

PAS MPs and assemblypersons, who are itching to get their third or fourth wives, are euphoric, whilst other men are jealous. One man said, ”PAS makes up these marriage rules and give the impression that they have a hotline to God.”

Women MPs are disappointed because PAS does not accord women equal rights, so they cannot divorce their crotchety old husbands. Tough!