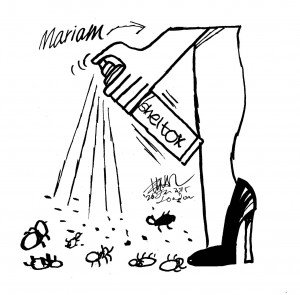 After I wrote the article “Ruling reveals Malay weakness” (Please see the article before this one), an extremist NGO was agitated.

Hai-yoh!!! If the NGO wants credibility, at least choose a better name….but to call itself “Semut”? You know what Malaysians do with “Semuts”? We use Shelltox or Ridsect or just pour boiling water or just pijak on them lah.

The FMT report about the police report lodged by Semut is below. I was told, I was on NTV7 (Sorry, I cannot verifyÂ  because I do not watch TV esp gomen propaganda channels) and guess what, the SB and Semuts went for kopi after lodging the report….Alamak…conflict of interest lah….so pally-pally!)

â€œI fear that more fomenters of hatred will emerge if the work of people like Mariam is not controlled,â€ Zaparuddin told reporters after lodging the report at the Dang Wangi police station. â€œAction must be taken before the situation gets more serious.â€

He said Mariam had gone overboard in questioning the restriction on the use of â€œAllahâ€ as a reference to God, adding that the issue should no longer arise now that the courts had decided the matter.

He also accused Mariam of inciting hatred towards Prime Minister Najib Abdul Razak with her allegation that he was dancing to the tune of extremists.

â€œMost dangerous of all, she has connected the local situation to the killings in France over the cartoon issue, as if Malaysia is no longer safe and is involved in the tumult of war,â€ he said.

He also criticised Mariam for allegedly saying that Malaysians practised Wahhabism, which he said was a false statement that could confuse Muslims and cause non-Muslims to see them in a negative light.

â€œThis is not the first time that Mariam has written a baseless article,â€ he added.

FMT spokesman Shahrom Shahruddin said the company would cooperate with the investigating authorities if the need arose, adding that it published Mariamâ€™s article without any malice towards any person or group.