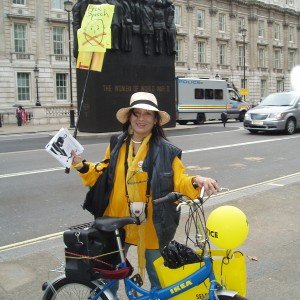 The articles are out, the photos have been credited, the quotes have been checked and the swollen feet have been massaged back to normality.

You made the organisers of London Bersih proud, answered the appeal by Maria Chin Abdullah of Bersih in KL, but most of all, shown Najib Abdul Razak your displeasure and disgust at his lack of leadership.

If Najib was sincere about the rakyat, he would not have banned yellow Bersih t-shirts nor, the word Bersih. Only someone who is afraid will resort to desperate tactics.

His actions show that his government is in denial but more than that, it shows a government which is afraid. Afraid of the power of the people.

Does he think that the abuse of power, the injustice and endemic corruption in Malaysia, are halal acts?

Now is the time to continue the momentum to push this government out because it does not learn, and it will never learn.

Only CLEAN ELECTIONS will ensure that the other four demands of Bersih will be fulfilled.

It is your responsibility to ensure the momentum to fulfill these five demands is continued.

It starts with Najib’s removal to be followed by that of Umno-Baru. The system is broken and it needs a complete overhaul.

Do you honestly believe that Umno-Baru, with or without Najib, can provide good governance and a corrupt-free environment?

Cancer cannot be cured with paracetamol.