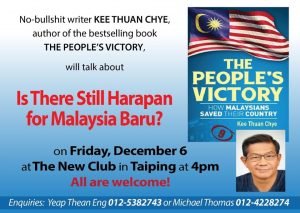 Kee Thuan Chye is a writer, playwright, and political commentator whose latest book, “The People’s Victory”, reached the top of the bookseller’s list in Malaysia, last year.

On 6 December, Kee will deliver a talk, in Taiping, called “Is there still Harapan for Malaysia Baru?”

Mariam Mokhtar: First of all, please remind us why you wrote this book.

Kee: I wrote the book because it was a historic phenomenon and I wanted to document it for everyone, including the generations to come, so that they can look back on May 9, 2018, and be reminded of how the people managed to bring about change.

And as my book also tells the story of the struggle the people had to put in plus the disappointments and despair they experienced, I hope to convey to everyone the spirit and determination of the Malaysian people. They persevered despite the setbacks they experienced. They pushed on even when the odds were stacked against them.

The book is my tribute to the people who fought and won. Not just the political actors, but, above all, the ordinary people.

Kee: I won’t reveal what I’m going to say in my talk, because this will steal the thunder from it. I would rather have people come to it and find out for themselves. There is nothing like hearing it live and first-hand. But I can assure you that my talk will not have any bullshit in it.

I’m doing it in Taiping because I was approached to hold it there by the Perak Academy. This is after the talk I gave at the Ipoh Club last March, which was very well-attended. It’s not a roadshow. I’m looking forward to Taiping because I think there are many people there who are interested in the future of their country.

Kee: Hope springs eternal in the human breast. But again I stress, come to my talk to find out.

Kee: Oh yes, there’s certainly more freedom now. Just read the mainstream newspapers. They carry stuff they never would have dared to do before GE14. Sometimes, this works against Pakatan Harapan because much of the mainstream media is owned by the Opposition, but that’s how things are in a free market.

I’d still like to see the Printing Presses and Publications Act abolished, as promised by Pakatan Harapan. It has no place in a democracy.

I also want to see the Sedition Act abolished for the same reason, and not replaced with another somewhat like it.

Kee: It’s very complicated. But let me assure you that I will be pointing this out in detail at my talk.

Kee: Same as above, because it’s related. Sorry to be so cagey, but I really don’t want to give away what’s in my talk.

Kee: I have always been outspoken. I haven’t been charged (touch wood) because I know how not to write or say anything defamatory or seditious.

I have, however, been punished numerous times for being outspoken on political matters by my employers when I was a full-time journalist. I have also been marginalised at work.

When it was not possible to speak out in the mainstream media in the 1980s and 1990s, before the advent of online media, I spoke out in the political plays I wrote. Like ‘1984 Here and Now’ and ‘The Big Purge’ (in which I satirised Big Brother Mahathir) and ‘We Could **** You, Mr Birch’.

I have always felt that it is very important to speak out so that those especially in positions of power know what we think, and in a democracy, what we think must count.

If we keep quiet, they will assume that we are satisfied even though we are not, and they will continue to make us feel dissatisfied, even worse.

We must also speak up to question wrongdoing. For instance, if we didn’t do that, the kleptocrats would have got away with the 1MDB thievery.

Kee: It’s not about freedom of expression. It’s about political opportunism that is allowed to be pursued untrammelled.

The guardians of peace and security, in this case the Government, should differentiate between the two and rein in the latter. But it does not do this for fear that it would piss off the majority race which also happens to worship the majority religion.

I think a hate speech law that criminalises speech that antagonises any race or religion might help to address the problem even though it might infringe on freedom of expression. But then again, freedom must be accompanied by responsibility, so if there are elements that irresponsibly spread hate for ulterior and political purposes, these elements must be curbed.

At the same time, I believe that the easing of racial and religious tension can be done with a concerted programme of education, not just in schools but in the larger society as well. And if there are racial and religious bigots at large, they should be re-educated. Unfortunately, I don’t see Mujahid embarking on such a programme.

Kee: Malaysians tend to take things at face value. Also, they haven’t been exposed to their own legends and literature, as were those of earlier generations.

If they were to be exposed, they would find that satire was ever present in Malay folklore through such techniques as ‘sindiran’. The stories of the clowns Pak Pandir and Pak Kadok, for example, are satirical. But these days, with the emphasis being placed on technical and scientific subjects, our school pupils are being deprived of their own cultural heritage and the treasures inherent in it.

Kee: I don’t know yet. ‘The People’s Victory’ took a lot out of me. I had to write it in three months, which was a massive undertaking when so much research was called for.

I wrote every day, sometimes 16 hours a day. And in the last month of writing, I didn’t step out of my house, not even into the sun. That was very unhealthy. Please don’t try this at home!

Kee Thuan Chye’s talk will be on Friday 6 December at 4 pm, at ‘The New Club’ in Taiping.

Please see poster above, for details.