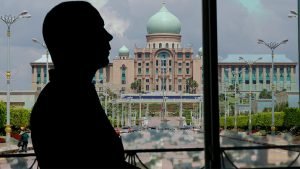 Who is the Datuk whom the police set free?

On 21 May 2016, a mysterious Datuk Seri caused a massive traffic jam in Kuala Lumpur (KL). He set tongues wagging, on social media. People allege that he is well connected to the higher echelons of power, in Putrajaya.

The allegations are these: Datuk is a special advisor to the PM. He is also a professor at a local university. The police are aware of his identity and his link to the top. He is untouchable. They had to set him free.

There you have it. Datuk’sÂ  “cable” to the top means that our laws are not being properly enforced.

In PAS, they claim that civil laws don’t work, but hudud will! Try giving civil laws a proper chance-lah!

What is so unusual about KL traffic jams?

We face traffic jams every day.

A car that has broken down on the highway will slow down traffic. An accident, even a minor prang, will reduce traffic to a crawl, because rubber neckers insist on taking photos of mangled bodies.

The onset of rain means people will swop their cars for their motorbikes. Traffic crawls because of the larger volume of cars on the road.

The traffic jam caused by Datuk is extraordinary. Datuk was travelling in an illegal motorcade of three cars comprising a Bentley, a BMW and a Proton Inspira.

Around 1.15 pm on Saturday, the Datukâ€™s Proton Inspira was driven with its blue lights flashing and the siren blaring, along the Connaught highway, towards Petaling Jaya. His aides blocked the traffic so that Datuk could have a smooth journey.

Fortunately, the jam and the motorcade caught the attention of the traffic policemen on duty. They ran the licence plates of the cars on their computer system. Having found that none of the vehicles were registered to the government, the police gave chase and stopped Datuk and his illegal motorcade at the old toll plaza.

PDRM said that the Proton and the Bentley were driven by the Datukâ€™s bodyguards, and the BMW was driven by a friend of the Datuk. His friendâ€™s wife was in the BMW.

The Datuk was sitting in the Bentley with another friend.

The bodyguard failed to show the permit for the gun, when the police asked to see it.

Datuk was not arrested

The cars were driven to the Kuala Lumpur Traffic Police Station, and Datuks aides questioned. The three drivers were arrested but the passengers were freed.

During a press conference, at the KL Traffic police headquarters in Jalan Tun HS Lee, ACP Mohd Nadzri told reporters that the men would be investigated under Section 170 of the Penal Code, for impersonating civil servants.

More questions have to be answered.

What about the crime of being in possession of a pistol? If you travel in public with firearm on you, you are either a criminal, or the police. You have to have a valid reason to be armed, so why did this â€œbody-guardâ€ not have his permit on him?

Why was the body guard arrested but the Datuk let off scot-free?

We are told that the armed man was the Datukâ€™s bodyguard. The Datuk must have bought the gun for him, unless the man had been contracted by a security company to protect the Datuk. It is a crime not to carry a pistol without a permit, on the person, so why are extra charges not pressed on him?

The men follow Datukâ€™s orders and yet Datuk is not charged.

Datuk with a Bentley gets special treatment

Malaysians are fed up with civil servants and VVIPs who make indiscriminate use of outriders and motorcades to ease their journey along our clogged roads.

The public pay their taxes and road tax, too.

Why should civil servants, politicians and well connected people be allowed to have special treatment on the roads, with their private convoys and motorcades?

Datuk has opened a can of worms

It is alleged, in social media, that this Datuk is an adviser to the PM. So is Datuk a civil servant?

How does a civil servant afford a Bentley?

Why should he have armed body guards?

Is Datuk open to blackmail or at risk of being kidnapped?

This traffic violation has opened up a can of worms.

Why is the Datuk’s identity kept secret? Who is Datuk?