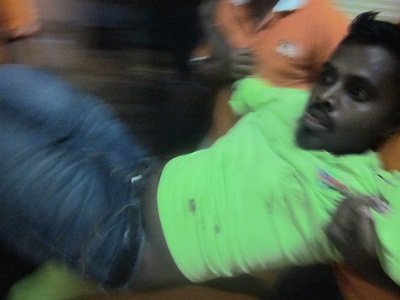 The video below is from an ABU (Anything but Umno-Baru (ABU) and Hindraf ceramah in 2012, in Klang.

They use Mat Rempits to intimidate the peaceful crowd who were only there to listen to the politicians. Many in the audience were elderly people. Many left out of fear.

The Malays and yes, they were Malays threatening the spectators. They used sticks to trash the chairs, threw bottles at the crowd, and rode their motorbikes in the hall.

Of course people were afraid. I would be, wouldn’t you?

Where were the police? In fact, the police dismissed the organisers’s claims of assault and intimidation.

Some of the faces are clearly evident on the video.

Were they ever caught and charged for causing chaos or a public commotion and threatening the crowd?

If this is the sort of country you want to leave your children, then do nothing.

But if you are angry by what you see in the video below (and in today’s Nothing to Hide 2.0 event, where the thugs tried to hurt former PM, Mahathir Mohamad), then please do something.

Talking to Umno-Baru politicians is pointless. We trusted them for 60 years and nothing has changed. In fact things have got worse.

The Umno-Baruputras have too much to lose, if they did not rule Malaysia again.

They have too much wealth squirrelled away in overseas banks, in properties in London, Melbourne, Sydney, Singapore, New York, San Francisco and other locations around the world.

They also know, they will lose their freedom if they did not rule in GE-14. They know that we will demand that they are thrown into jail for crimes against the state, for the deaths, injuries and other evils they have committed. For the segregation, for child marriages, for religious persecution, for the unexplained abductions.

If you do nothing, then do NOT complain again. I, and other Malaysians, who are trying our best to rebuild our nation, will not listen to you.

Prepare to vote in GE-14. Malaysia depends on you!