The nation is in a mess, primarily because of Umno Baru. For 62 years, they sold the Malays a lie, which was believed lock, stock and barrel.

Malays are in positions of power in government, the civil service and the armed forces. They dictate policies and run the wheels of government; but Malays are also the nation’s worst hypocrites.

Many are greedy. Many are happy with short-term solutions. The majority do not think of the consequences and are happy to hide behind the cloak of race and religion, if it will bring them some material benefit or status. The day they lose everything will probably be the day they will regain their humility, values and self-respect.

Who stole from the rakyat? Malay leaders. Who mismanaged Tabung Haji and GLCs like Mara and Felda? Malays.

Most Malaysians are sick to the back teeth of the lies, the broken promises, the manipulations, the squabbling and the hypocrisy. We want to get on with our lives, but Pakatan Harapan politicians have reneged on the promises they made before GE-14.

Prime minister, Dr Mahathir Mohamad, gave a talk at the World Leaders Forum at Columbia University in New York and was criticised for his anti-Semitic remarks. He said he was merely exercising his right to free speech.

Back home, anyone who is foolish enough to make negative remarks about Islam or royalty will be swiftly apprehended.

The indigenous population cannot survive because the wild animals, upon which they depend for food, either die or migrate inland. Relocation ensures that the native people lose all their ancestral land rights.

With monoculture, Malaysia is heavily reliant on food imports, and we risk starvation in the event of a global economic crisis, drought or war.

Dr Zakir Naik, the fugitive from India, has red carpet treatment and was offered permanent residency by the previous Umno Baru regime. He is a divisive figure, but is revered by Muslims in Malaysia. Some foreign spouses (married to Malaysians), many of whom are degree holders, die before their immigration status is addressed.

Non-Malays, if given half a chance, would migrate because affirmative action policies deny them opportunities in education, housing and jobs; but this rule does not apply to the children of wealthy non-Malay cronies. They return to Malaysia after their overseas studies, to head the family business empire. 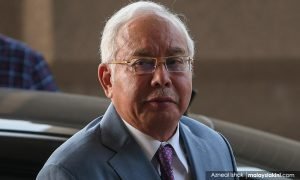 Disgraced Najib Abdul Razak (above) approved RM120,000 per year allowance for himself, as chairperson of the 1Malaysia Development Berhad (1MDB) board of advisers. Malaysians on minimum wage earn in one month, what Najib earns, in his 1MDB allowance, in three days.

Many Malaysians want vernacular schools to be shut, because they discourage inter-racial harmony. Why not first close down the religious tahfiz schools?

Many of us have seen, first hand, the poverty among Malaysians. I witnessed it in my voluntary work, when I worked in East Malaysia. One need not go to rural areas to discover poverty, because we can find poverty in the back streets of Kuala Lumpur’s Golden Triangle.

Contrast this with the Umno Baru/BN politicians whose sources of income are questionable, but who lead lives that make self-made millionaires envious.

Last August, the new Malaysian permanent representative to the United Nations, Syed Mohamad Hasrin Aidid, told Bernama that Malaysia had almost eradicated poverty, and that only one percent of Malaysians live below the poverty line.

One wonders what Syed Mohamad will make of the recent report by UN Special Rapporteur on Extreme Poverty and Human Rights, Philip Alston (above), who said that Malaysia’s poverty rate was closer to 15 percent. On Sept 24, we read about the mother, Aisha Othman, who ate uncooked rice to avoid wasting gas for her stove and have more money to buy bread for her seven-year-old daughter, Paymitra Abdullah.

Has the current Harapan administration addressed the issues mentioned in the Unicef report, of February 2018, which said that one in five of the children in KL’s low-cost housing is malnourished?

We were full of hope in May 2018, but we should have realised that something was amiss when the government back-pedalled on Icerd in November, and introduced Project Fear in the form of the Deep State.

Racism and religious intolerance are the millstones around our necks. These prevent Malaysia from progressing. Putrajaya thinks that by prolonging the pain, the rakyat will learn to tolerate it.

Can there be an end to this madness? Yes, but the troublemakers, like Ahmad Zahid Hamidi and his ilk in Umno Baru and PAS, must be reined in.

Politicians who are insecure, like Kedah Mentri Besar Mukhriz Mahathir, and Youth and Sports Minister Syed Saddiq Syed Abdul Rahman, who expressed reservations about Icerd, are not good for building Malay confidence. Their negativity is infectious.

It is impossible to believe that there are no self-assured, motivated, confident and intelligent Malay politicians who can present cogent arguments that will convince the Malays that they will not lose their special rights, that the position of the Malay rulers will not be threatened, and that the Malay language will not be undermined.

So, have the Malay politicians who can make a difference, been gagged? DAP is not the threat, but Malay insecurity is.