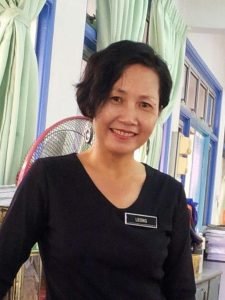 Many students reward their teachers with their best performances. Some show their gratitude to their teachers, by winning a literary, academic, musical or sporting award, or by clinching a scholarship for further education. This is their appreciation for their teacher’s efforts in educating them and shaping their character.

One young doctor, 25-year-old Jerome Chin, showed his gratitude by donating 67% of his liver to his former teacher. Last July, his school-friend, Krystal Teh, said that her mother, who was his primary school teacher, was seriously ill, with a liver condition.

Leong Fong Peng taught Chin from 2003 – 2004 at SJK (C) Kong Min in Kuatan. Her health was fast deteriorating and eight possible donors were found to be unsuitable, as their livers were not a perfect match.

Aware that his former teacher’s future was bleak, Chin volunteered to donate part of his liver to save her life. 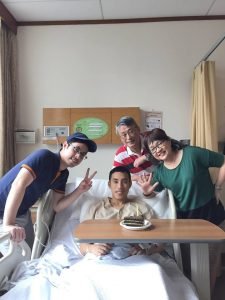 The life-changing decision to help Leong did not take long and he only took one day, to think about it. As a young man, with few things to think about, he added, “I have no liabilities.I have no family of my own. No girlfriend. No debt.”

Young  Chin’s selfless act was even more startling when he said that he used not to like his former teacher, as she used to cane him frequently, to discipline him. Admitting that he was not one of her star pupils, Chin said that he only acknowledged Leong’s role in shaping him to be the man, after he had left school.

When asked to explain his motivation for helping her, he said, “I did it because I wanted to save her. She was one of the few teachers, in primary school, I remember with fondness. Her daughter is also my classmate, with whom I have kept in touch, over the years. She is not a stranger. She is from my hometown. She  is “my people”.”

I’m not a hero

Chin studied medicine, in China, and graduated last year. He denies that he is a hero and said, “I studied overseas, and treat strangers in faraway lands. So, when my own people need me, how can I refuse? It was a moral obligation.”

Using his medical background to reassure his father who had grave concerns for him,  he said, “I helped to dispel some of the fears he had for me. I have also grown desensitised to the idea of surgery. I have dipped my own fingers into another living persons’ innards. By donating my liver, I can empathise better with patients. This is an important lesson for me in my growth as a doctor.

The transplant was conducted on 6 September, at the the National University Hospital, in Singapore. After recovering from slight jaundice, after surgery, he is now recuperating at home. Surgeons have said that Chin’s liver would regrow fully after three months. 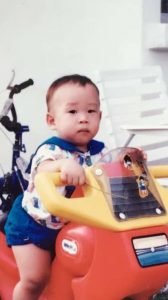 The young Jerome on his motor

An active sportsman, a keen badminton player and swimmer, Chin said that he will resume his sporting activities, once his wound heals. He said, “Once my muscle and tissues recover completely, I will be back to my old self, by Chinese New Year.”

He was surprised to learn that many of his friends, including some doctors, said that they would not emulate him. He said, “It was a logical decision for me. If you have the chance to extend another person’s life for another 10-20 years, at the cost of one week’s hospitalisation, and a 1% risk of mortality, would you not take this chance?

“If I could do it again, I would. I only suffered for a week, but my teacher’s life can be extended by a decade. To me, that sounds like a really good deal.”

Showing that he had not lost his sense of humour, he added, “The added bonus is that I have an awesome scar on my tummy, and I do not have to worry about impressing girls, from now on!”

Note:  Leong was admitted to the intensive care unit (ICU) after coughing up blood, some days after the surgery and was moved from the ICU to a high dependency unit. 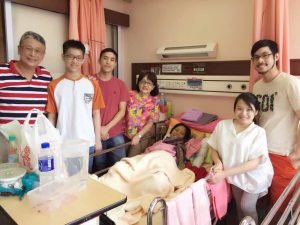 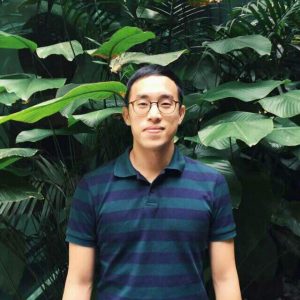 Jerome: “I have an awesome scar on my tummy, and I do not have to worry about impressing girls, from now on!”

Both Leong and Jerome are recovering well. 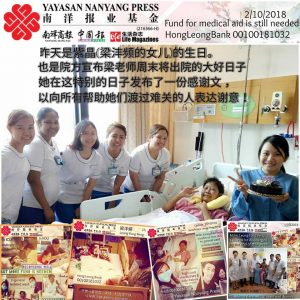 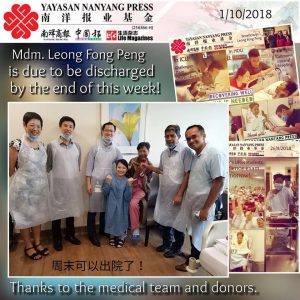 Mdm Leong will soon be home. Thank You Jerome and the medical team. Get well soon, Mdm Leong.