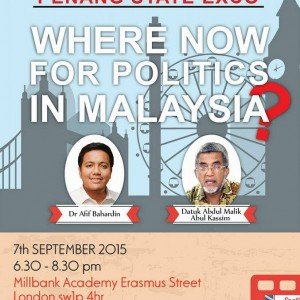 I wrote this on my Facebook a few days ago…

“…Bersih is over and many of you were moaning that the presence of the Malays was too few and far between.
Was it for real? Or was the low turn-out of Malays just a perception.
Do you want to know why?…”

Some of you responded and put forward your theories. THANK YOU….

One person whom I met a few days ago, said, “Does it really matter….We are all Malaysians.”

However, Malaysia is in a mess, and as far as I can make out, the politicians put us in this mess.

I do not have all the answers……but on Monday 7th September, we have a two politicians in London, one is a seasoned politician, the other is a young doctor.

Both are from PKR.

Both are from Penang.

Both will have analysed the political implications for the Opposition, after the global BERSIH rally

Both will have detailed knowledge of a renewed Opposition coalition, after the bust-up with PAS

As the Penang Exco, Abdul Malik said that despite Penang being among the top three states which contributed the highest amount in income tax revenue, he said that the economic sector in Penang was neglected by received little government funding from Putrajaya.

Dr Afif Bahardin, is the youngest state executive councillor in the country.

You and I….we are trying to resolve the mess Malaysia is in. We can help with dialogue and discussing sensitive issues.

Come join me and let us pose questions for both Dr Afif and Dato Abdul Malik to answer.

What is the future direction for politics in Malaysia?

How do we move forwards with a fractured community?

Why is there overdevelopment in Penang?

Remember what Ambiga said at the Bersih talk, on SUnday 23rd in London……Scrutinise youe politicians. question them, make them accountable.

So, are them…….where were the Malays in Bersih? What are their views on this?