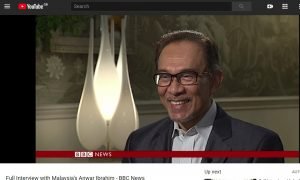 Stephen: “Anwar Ibrahim may be a changed man for the better.  However, he has to prove himself through his words and actions.

Anwar’s recent negative comments on Finance Minister, Lim Guan Eng’s, revelation of corruption within the heart of the previous government, and some of his statements and activities following his release are not good omen.

Malaysians must watch Anwar with an eagle eye and not to give him the slightest opportunity to bring our country back to the dark days of Najib and sell our country to the highest bidder, namely Bloomberg, Wall Street and the US.

Yet all the reference during the interview were on Anwar’s incarceration in 1999 by Mahathir.

Anwar’s PKR with its coalition partners, which we all support,  failed to win the 2008 and 2013 elections.  Anwar boasted that he could bring sufficient UMNO’s MP to cross over to the opposition and topple the UMNO led government following the 2013 election.  These were just empty words which is Anwar’s hall mark. 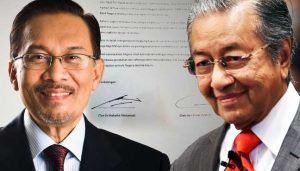 Without Mahathir’s involvement it is doubtful that PKR and its coalition partners would have won the 2018 GE. There was no reference to this crucial point throughout the interview.  The tone of the interview was that Mahathir needed Anwar’s support rather that the support needed was mutual.

A key reason for the breakdown of Anwar’s relationship with Mahathir was Anwar, as Finance Minister, attempted to sell Malaysia cheaply to his Wall Street friends with Anwar’s policies of implementing IMF’s discredited policies of austerity in Malaysia and allowing foreign interests, mainly US, to buy up Malaysia’s struggling corporations and financial institutions etc. for the cheap during the 1997 Asian Financial Crises.

The rape of Malaysia

In return for Anwar’s opening Malaysia to be raped by Wall Street, his Washington neo-cons friends would back him to be PM of Malaysia and eventually the global leader of the “moderate” Muslim world.

The support received by Anwar from his Washington neo-cons friends and the West was astounding during Anwar’s time as Finance Minister in the 1990s (in 1998 the US Newsweek magazine named Anwar the “Asian of the Year”), his incarceration by Mahathir and following his release in 2004.

Anwar was touted round the globe and Western capitals as an anti-corruption and anti-cronyism reformist which anyone who have studied Anwar will not recognise.

It should be noted that Ahmad Zahid Hamidi, the head of UMNO’s youth wing in 1998 and Anwar’s close associate,  gave notice that he would initiate a debate on “cronyism and nepotism” at the UMNO General Assembly in 1998.

Please note that this is the same Ahmad Zahid who was Deputy Prime Minister under Najib from 2015 until he was thrown out after the 2018 GE and now acting President of UMNO.  This man, a former close associate of Anwar and Anwar’s spokesman on “cronyism and nepotism” in 1998, kept silent on the 1MDB scandal while happily serving as Najib’s deputy!  You could come to your own conclusion.

From the 1990s, Anwar’s Washington neo-cons friends’ plan was to groom Malaysia, with the support of Anwar as PM, to become the US’ “Saudi Arabia” of South East Asia to further the imperial interests of the US and the Anglo American Zionists in South East Asia and the Pacific region.

Anwar is seen by progressives and many in Malaysia as the US Trojan horse to bring Malaysia within US’ grip.  I am definitely not a fan of Mahathir (except that he did a very job at 2018 GE) but Mahathir’s foreign policy is for Malaysia to remain a non-aligned nation and not a stooge to any other nation.

I totally condemn the way Mahathir discredited Anwar and the jailing and treatment of him. However, I have no doubt that in 1998 if Anwar had the upper hand, he would have acted against Mahathir in similar manner.”