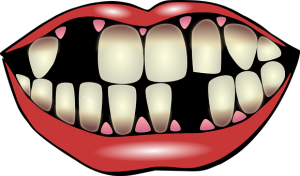 Yesterday, a 26-year-old online cosmetics dealer, Fatin Nabilah Mohamad Hassan, 26 was sentenced to 24 months’ jail and fined RM100,000 by the Sessions Court. She had been found guilty of operating an unlicensed dental company and carrying out procedures to install fake braces.

Judge Harmi Thamri Mohamad @ Shaharuddin said that the defence had failed to prove reasonable doubt in the prosecution’s case.

The court ordered Fatin, who was absent from court, to serve the jail term from the date she reports herself to the prison and to serve another 12 months’ jail if she failed to pay the fine.

Her lawyer, Khairul Amin Abdullah failed to postpone the imprisonment and the court has also ordered Fatin to pay the fine immediately.

Khairul claimed that his client was absent as she was undergoing acupuncture treatment at the Melaka Hospital for a slipped disc. The court rejected her absence, as she had failed to submit a medical certificate from a government health clinic confirming that she could not come to court for health reasons.

The judge said that the offence committed by Fatin was a serious one and should be taken seriously by all parties as it affected the health and safety of the public.

“The public should also come forward and provide information to the health ministry if they have knowledge of any unregistered individuals who carry out fake braces installation procedures”.

Fatin had been charged with operating a private dental clinic without registering under Section 27 of the Private Healthcare Facilities and Services Act 1998, at a hotel room in Jalan Metro Pudu 2, Fraser Business Park, Kuala Lumpur, at 12.10pm on Dec 11, 2015.

She is charged with committing the offence under subsection 4 (1) of the act and punishable under subparagraph 5 (1) (a) (i) of the same act, which provides for a fine not exceeding RM300,000 or imprisonment of a maximum of six years or both, upon conviction.

Nine prosecution witnesses and four defence witnesses were called to testify during the trial, which began in May 2016.

Other fake dentists and their punishments

In mid-October 2017, 48-year-old Chen Jianghong, from the People’s Republic of China, was caught treating a patient in a hotel room in Kuala Lumpur.

When ministry officials raided the room, Chen was wearing a face mask and treating his patient. One hand was holding his dental equipment, whilst the other was in the man’s mouth. He was going to provide dentures for his client.

He was fined RM70,000 and jailed for a month, and warned that if he did not pay his fine, he would then be jailed for six months.

Nur paid the fine, with the help of two NGOs.

Did the NGOs who settled Nur’s fine, not realise that she was breaking the law?

Will the clueless NGOs only come to their senses when someone dies or is seriously disfigured from the dental treatment? Will these NGOs put their own safety at risk, by being treated by fake dentists?

Nur, the fake dentist was operating her fake clinic in Melaka. She goes by the handle  “Naraswaraa” on Instagram where she has a following of around 12,000 people, checking out her fake dental services.

IT’S WHO YOU KNOW, NOT WHAT YOU KNOW

How come Nur Farahanis and Chen were not jailed for two years?

Is this the reason why? 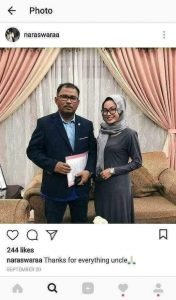 Photos were circulating on social media, and in the Malay magazine Jelita, of a beaming Nur, beside a man, whom social media practitioners allege is her uncle. The photo of Nur has the caption, “Thanks for everything, uncle.”

Do you recognise who uncle is? That is perhaps why she had NGO help and was not jailed.

After all, didn’t today’s judge say that providing a fake dental service is a serious offence and that it should be taken seriously by all parties as it affected the health and safety of the public; but if you know people in high places, you escape a long jail sentence, especially if your uncle is the Chief Minister of Melaka.

Where is the uniformity in sentencing?