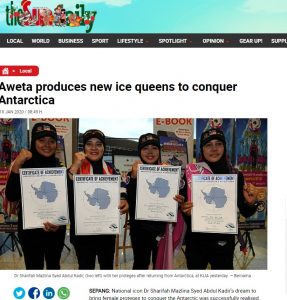 Some people believe that the All Women Expedition to Antarctica (Aweta) by four Malaysians to retrieve a time capsule, which was buried in the ice cap in 2004, is a waste of time and resources. Few will disagree.

Many people think that the Aweta trip by the four Ice Queens is a vanity project. 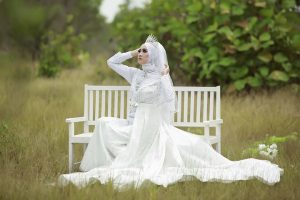 Do the organisers and the group leader understand the meaning of a time capsule?

Time capsules contain objects from the current period in history, for people in the future to dig them up, to study what life was like at an earlier time.

The time capsule that Aweta is attempting to recover was buried only 15 years ago, by the group’s mentor, Sharifah Mazlina Syed Abdul Kadir. Today, she leads three other women – a pharmacist, a civil servant and an army corporal to try and locate the time capsule.

Sharifah is described as a polar adventurer and the first Asian woman to explore both the North and South Poles. People will wonder why are there no non-Malay women in her team? Did they fail the mental and physical tests?

Is digging the time capsule, which Sharifah planted, a pointless exercise prompted by a change in government, and prime minister? Can she not realise that the money and effort would be better spent on more useful things in Malaysia?

Was taxpayers money used to fund this mission, or is it a private initiative?

If it is a private trip, who are the people or companies behind it? The money could be better spent on other useful schemes; for instance, to empower single mothers, instead of an ego trip for four women.

How much money was spent sourcing the right candidates, training them, kitting them out with the proper tools and clothing, and liaising with experts from other countries, who have experience in travelling to Antarctica, and ancillary equipment such as skis, sledges, tents and communication devices?

How much did the departure ceremony at KLIA, on  12 December, cost?

What is the cost of transport to an environment that is both extreme and remote?

Presumably, the four women will be aided by a supporting crew, like experts who must check the equipment for the trip. What is the size of the ancillary crew, what do they do and how much do they cost?

What is the contingency plan, if things go wrong, and the women have to be rescued should they suffer serious injury or an unexpected illness, such as a burst appendix?

The capsule that is to be retrieved contains a message from the fifth Malaysian prime minister, Abdullah Ahmad Badawi (above). If she is successful, Sharifah intends to return with the capsule and reveal his message, in time for 2020. Whatever for? We do not wish to be reminded of Abdullah’s ineffectiveness.

Doubts were expressed before the trip was made

Sharifah doubts that she will be able to retrieve the time capsule, because its location may have changed and it could have become submerged. So why go?

Sharifah had planned to leave another time capsule, with a message from Prime Minister Dr Mahathir Mohamad. The capsule was intended to be named after him, but her idea was quashed. Leaving items on the continent is illegal as it contravenes the Antarctica Act.

If taxpayer’s money is involved in funding this vanity project, then more Malaysians should complain about the waste of money, as any trip to Antarctica is expensive.

Surprisingly, no mention has been made of the trip being done for research purposes. Malaysians will remember the former disgraced menteri besar of Terengganu, Ahmad Said (above), who made a junket to Antarctica, accompanied by a large entourage, in January 2014.

When the public complained, Ahmad claimed that the trip was to study climate change and understand the reasons for the flooding in the East Coast.

He made the trip within months of being removed from his post. How did the people of Terengganu benefit from Ahmad’s jolly? When will Malaysians realise that Umno-Baru politicians were taking them for a ride, to fund their cruises and their first class, all expenses paid, travel? Ahmad could lobby the government to halt deforestation.

Helping other women should start at home

The Antarctic is one of the ultimate travel destinations. It is virtually unspoilt and hauntingly beautiful, but politically connected Malaysians seem to be able to undertake this trip with ease.

Sharifah could argue that she is studying the endurance of Malaysian women. So, if this trip is also a study of fortitude and character, she should look at the things many women endure at home. Single mothers and many women scarred by domestic violence in a male-dominated environment, endure extreme hardship. Many non-Malays at the bottom of the poverty trap suffer the inequalities of a system that benefits mostly the Malays. These people survive only because they are resilient. They are a study in endurance.

The “Ice Queen” is a derogatory term. Ice queens are described as unemotional women who lack affection or warmth of feeling, ie they are frigid.

The Aweta Ice Queens should look closer to home, and try to find solutions to the problems faced by our women, instead of looking for a time capsule buried in the shifting snowdrifts of the South Pole.

Why didn’t Harapan cancel this money-and time-wasting project which was started by the previous Umno-Baru administration?