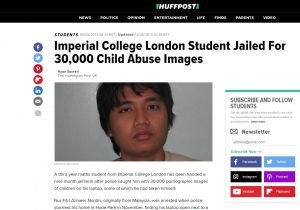 In May 2015, the rakyat was outraged, when a MARA maths scholar, Nur Fitri Azmeer Nordin, who was studying at Imperial College, was arrested, tried and charged with producing and possessing thousands of “Category A” images, depicting penetrative sex with minors.

The British Metropolitan police said that Nur Fitri had amassed around 30,000 images of child pornography which they described as some of the most extreme they had witnessed.

Today, Nur Fitri has re-surfaced, and Malaysians will be shocked to learn that he is pursuing a postgraduate course at Universiti Kebangsaan Malaysia (UKM).

According to news reports, the former maths prodigy was scheduled to complete his Master’s degree, but officials at UKM upgraded him, because he was “excellent”, a conscientious student and was qualified for PhD level. 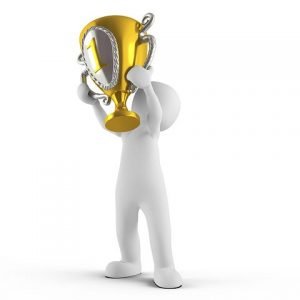 Nur Fitri’s professor said that he had no issues with his student and was full of praise for him, and that he was a genius.

He also said that Nur Fitri claimed that his actions were NOT wrong. Is the professor so naïve to think that the paedophile would admit his guilt?

Malaysians are horrified and wonder which is worse? The professor who appears to have dismissed the crime, or Nur Fitri who thinks he is innocent of any wrongdoing?

Nur Fitri did not serve his full sentence of five years and only completed 18 months, before his “rescue” by MARA.

The UKM professor’s attitude is both unacceptable and irresponsible. Are there no howls of protest from other members of the university board? Is there no consideration for Nur Fitri’s fellow students, especially those who may have children? Have the opinions of the university union and the faculty members, been sought? Are they even aware that they have a paedophile in their midst?

Nur Fitri’s professor may think that his pupil’s past is not important and irrelevant, but many postgraduate students are married and have young children. They may unwittingly invite him home, for social events, parties or university family days.

It is alleged that paedophiles will befriend the families, to gain the trust of the adults. Then, a child may be left alone with the paedophile, enabling him to take indecent photos or abuse the child. 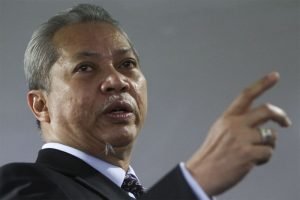 Malaysians will recall the furore caused by the paedophile, in 2015. Despite being sentenced to five years in jail, MARA officials and the former Rural and Regional Development Minister, Shafie Apdal, said that they would appeal against Nur Fitri’s five-year sentence.

The then Mara chairman, Annuar Musa, wanted Mara to give him a second chance. Malaysian citizens were furious and showed their anger in an online petition.

The victims of child pornography do not get a second chance. Their images are circulated and shared around the world by these depraved paedophiles.

The then IGP, Khalid Abu Bakar, was adamant that a sex offender’s list was unnecessary. According to an online newspaper, he said, “It’s not a problem for us. But as I said we already have a criminal registry, so it serves the same purpose with a sex offenders’ registry.

“To me the existing criminal record registry is already enough. If we set up another registry for those involved in sexual crimes it would overlap.” 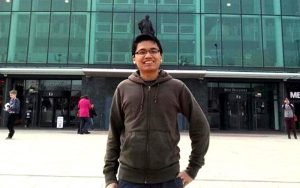 His views were opposed by the erstwhile Foreign Minister, Anifah Aman, who strongly supported the need for a sex offenders’ register, especially for the perpetrators of crimes against children. He said that the list would enable the police to monitor the perpetrators, easily.

Anifah  also confirmed that his ministry would not intervene, in the English court, to reduce Nur Fitri’s sentence. He warned students that they had a duty to focus on their studies and preserve the image of the nation. He also criticised the actions of those wanting to help Nur Fitri, despite his “serious and inhumane crime”.

The then Sports Minister, Khairy Jamaluddin, criticised the move to give Nur Fitri a second chance. and warned MARA to stop wasting public funds.

In addition to the final tabling of the sex offenders’ list, four years ago, the then Minister for Women, Community and Family Development, Rohani Abdul Karim, said that the Sex Offender’s Registry would list the names, identity card numbers, photographs and particulars of the offences. She also said that this information would be made freely available to the public.

So, fast forward to August 2019, is Nur Fitri on the Sex Offender’s Register?

Will his class mates be told?

Will the UKM staff be made aware of his past and the risks they may face?

A few hours after I wrote this post, I am told that Nur Fitri is NOT on the sex offenders list. Read what the Deputy Women, Family and Community Development minister had to say here.

He has committed a grave crime, and been charged in a court of law and only served part of his sentence in a UK jail, before MARA whisked him home.

He poses a potential risk to others around him, especially if there are children. 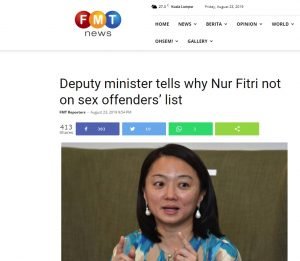