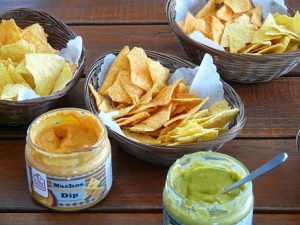 You recoil in horror when he double-dips. You think that the man might as well have used his tongue to taste the dip, like licking ice-cream. Others have compared double-dipping to putting one’s own mouth into the dip.

Imagine another scenario. You are seated for dinner with a group of people. You host sees that your plate is almost empty, and reaches over, chooses a piece of meat from the communal dishes in the centre of the table, and puts it onto your plate. He thinks he has done you a favour, but inside, you feel sick.

Others see that you could do with more food, so they use their own spoon to serve some fish, vegetables and other choice morsels onto your plate. Instead of feeling happy that your fellow diners are attentive to your needs, inwardly, you suppress the urge to throw up.

Although you know some of the guests, it does not excuse the fact that they broke etiquette. They should not have used their own spoons to put food on your plate.

This action is called double-dipping and some of you may not think there is nothing wrong with this.

The serving spoon has a purpose

What would be your reaction if someone were to double-dip at dinner? Someone I know has no qualms about scolding the double-dipper. He insists that a serving spoon is used.

If the double-dipper persists, the person will throw the dish straight into the bin, to the consternation of his wife. He tells her that he would rather waste a bit of food, than allow others to be contaminated. He says that it is better to be safe, than contract a contagious disease.

You may think that the person who is double-dipping is just being cheeky, or has not seen the serving spoon.

The double-dipper may think there is nothing wrong in double-dipping, but there is scientific evidence to prove that this act is both harmful and dangerous.

The Sunday Times reported that the editor of the Harvard University’s Healthbeat journal, Dr Robert Shmerling, wrote about a study, in the Journal of Food Safety, which showed that the amount of bacteria in dips, increased if someone had double-dipped.

Even the process of dipping into a bag of pop-corn with your saliva contaminated fingers will introduce and increase the anount of bacteria in the packet of pop-corn. A paper in Food and Nutrition Sciences reported that saliva contained 1 million bacteria per millilitre.

So, do you double-dip? Do you use your own spoon to dish food onto a friend, or family member’s plate, instead of using a serving spoon?

Can germs from your mouth be transferred to the food on the dish? Or, from a crisp into a dip?

Does the person who double-dips lack table manners? Will he contaminate food that is to be shared at the table?

So what happens when you use your own spoon to transfer food to another person’s plate?

A health worker said “I frequently work with HIV/AIDS people, and I am careful that they do not double-dip when having communal food. It is not just HIV/AIDS you have be careful of, but there are other diseases like Hepatitis which are just as dangerous. People just do not think about the health implications.”

Another person said, “People may think they are clean, but who is to know? When seated at a table with strangers, or people I do not know too well, I would rather people observed proper etiquette.

“Would you like it if a doctor or dentist did not properly sterilise his equipment, and used it on you, after he had examined a HIV/AIDS person, someone with Hepatitis or someone with tuberculosis or even flu?

“I do not double-dip and I warn my guests at dinner, not to double-dip. People are very careless these days, but you could spread many diseases, from a simple act with a contaminated spoon.”

Double-dippers show arrogance and lack of consideration for others. Double-dipping is not a part of Malaysian culture. The Chinese have their gongkuai (serving chopsticks), the putongkuai (personal chopsticks) and their serving spoons. The Malays and Indians use seving spoons.

Food for thought for the double-dippers!

(Video is from YouTube from the scene in Seinfeld)