P Ramakrishnan asks the Pasir Salak MP, Tajuddin Abdul Rahman, whether he is a good Muslim or not? His article which he wrote last month, is below.

This article is a reminder to everyone to urge the authorities to take swift and stern action against politicians, like Tajuddin, who stir-up racial and religion sentiments.

A video of Tajuddin and his hate speech is reproduced here.  It is not my video and was sourced from YouTube (Editor Rebuilding Malaysia)

Are you a good Muslim, Tajuddin?

‘Those who will not reason, are bigots, those who cannot, are fools, and those who dare not, are slaves.” – so said Lord Byron. Pasir Salak MP, Tajuddin Abdul Rahman seems to fit all three descriptions! 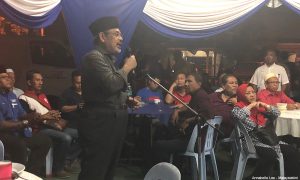 On the eve of the Sungai Kandis by-election, Tajuddin had urged the voters not to support a “Christian-led” Pakatan government.

He is not only a bigot for saying this but a fool as well to label the Pakan Harapan government as “Christian-led”. Only a fool will say foolish things without adducing any evidence to support his claim.

Speaking to an all-Malay crowd of about 100 people in Kampung Jawa on the eve of the Sungai Kandis by-election, he referred to an apparent viral video featuring Christian pastors celebrating Harapan’s victory during the May 9 general election.

In the so-called viral video, the pastors were purported to have said that “Christians have taken over Putrajaya and other states”.

To emphasize this atrocious claim, he reiterated “Memang betul!” (This is true).

This liar did not produce this non-existent video to convince his listeners. How could he? Like the rest of his brainless brethren in Umno who like to shoot off their mouths without thinking, Tajuddin recklessly lied. 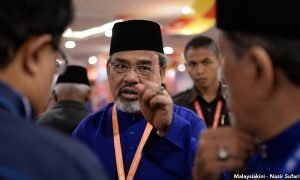 Lim Kit Siang, the MP for Iskandar Puteri, in responding to this preposterous claim stated. “I am not aware that there is such a video.”

He further questioned, “Did Tajuddin concoct such an irresponsible story out of thin air?

“I challenge Tajuddin to produce such a video, or he must be condemned and repudiated by all Malaysians, including all Umno-BN leaders, as utterly irresponsible and disreputable.”

The trouble with liars is that they are not content with one lie. They go on a lying spree. Tajuddin is no different.

A responsible MP would ensure that he had got his facts correct before stating a point. Not Tajuddin!

Again, Kit Siang exposed his blatant lie: “….let me educate Tajuddin that although Pua and Loke have Christian first names, they are not Christians.”

What else did this liar say? 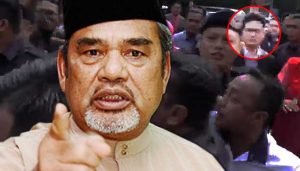 “These names which I have mentioned are people spreading Christianity.

“We need to be wary, they will use their politics as a platform to spread Christianity,” he said.

This blabbermouth seems to speak with authority and in full knowledge when he stated, “These names which I have mentioned are people spreading Christianity.”

Tajuddin states this as a matter of fact. He doesn’t speculate or postulate. He states it as if it is a proven fact.

Spreading Christianity among the Malays, as we all know, is against the Constitution. That being the case, would the so-called spreading of Christianity have taken place right under the nose of Jawi, unknown and unpunished in a Malaysia that is controlled by the authorities who are gung-ho in these matters? Did he make a police report against these MPs? If not, why not? As a good Muslim wasn’t he obliged to make a report and alert the authorities?

Like an Umno slave he repeats the worn out Umno lie that the DAP is out to abolish the monarchy. If that was the DAP’s declared intention, why was no action taken against them? There is a simple answer to it. There has to be a basis for taking action without which you will make a fool of yourself.

“In the long term, ladies and gentlemen, if they can they will abolish the monarchy system,” he lied.

The DAP has been around for 53 years. Has there been any evidence that they wanted to get rid of the monarchy? If such a call was made they would have been deregistered and buried for good – something the Barisan Nasional would love to do. But the DAP never gave them any excuse simply because they respect and honour the Constitution.

In view of his atrocious lies and preposterous claims we are obliged to ask Tajuddin, “Are you a good Muslim?”

As far as we are concerned a pious Muslim will not lie. He will not distort facts. He will not willfully incite hatred against fellow Malaysians. His conduct will be beyond reproach. He will be a shining example of integrity. These are the attributes of a good Muslim.

We ask once again, “Are you a good Muslim, Tajuddin?”

P Ramakrishnan is the long-serving former president of Aliran who served three and a half decades on its executive committee, and has been with Aliran since its inception in 1977. Now an ordinary Aliran member, he continues to highlight issues of public interest to a larger audience.
Rebuilding Malaysia