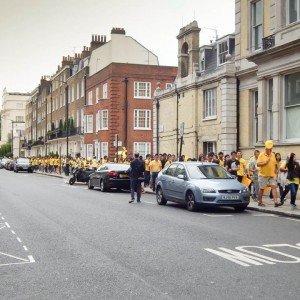 According to him, the Foreign Ministry will take legal action against the Malaysians who took part in overseas Bersih 4 rallies.

Reezal must re-examine his values. Malaysians, at home and abroad, are trying to restore the reputation of the nation, to its former glory.

He must be blind or daft or both. Corrupt party leaders, and corrupt politicians, who accept monthly gratuities for their “loyalty”, are an insult to the nation. A party leader who accepts RM2.6 billion donation from a foreigner tarnishes the nation’s image.

A former PM Mahathir Mohamad and former Depute PM, Muhyiddin Yassin made a lot of noise because the “donation” ended up in Najib Abdul Razak’s personal account.

They are implying that if the “donation had been deposited into Umno-Baru’s account”, then everything is alright.

Many Malaysian institutions have been compromised. With few people of integrity remaining, the people have no recourse but to show their disgust in the only way they can, by holding peaceful rallies. Hence, Bersih 4.

Here is a list of Malaysians who worked overseas, and who sullied the nation.

The military attachÃ© who was accused of alleged rape in Wellington, New Zealand, quickly fled the country, and used his diplomatic immunity, to escape prosecution. Despite various attempts to extradite him, he claimed that he was too ill to travel. What about the trauma of the woman he sexually assaulted?

A MAS steward tried to comfort a woman, on a flight to Paris, by being intimate with her, as she slept in her seat. He has since been sacked for his sexual perversions.

In Sweden, the tourism director and his teacher wife, were accused of child abuse and imprisoned. The couple have since returned, to Malaysia and the wife, is allegedly teaching again. This just shows that we do not take child abuse seriously.

A Mara student was arrested by the Metropolitan police, because he possessed over 30,000 indecent images of children. Mara’s response was to give this paedophile a second chance. What sort of values do our leaders have, when a sexual deviant is treated better than his victims?

In Melbourne, a casual driver to the Malaysian Consul forged papers so he could extend his stay in Australia while his wife was studying for a postgraduate degree in Melbourne. In reality, they were both operating a restaurant, called Little Ipoh. The Malaysian taxpayer was paying her tuition, and enabling her to conduct an illegal business in Australia.

The list goes on. These are the cases we know of. What about those which were swept under the carpet?

If these Malaysians work for the government, they are carrying the flag. They let Malaysians down and tarnished the nation. These people, along with the man with the RM2.6 billion donation, and his sycophants, are the ones who insult the nation.