Yin says: “Artists (all disciplines) are more powerful and influential than they realise. Through their art the corrupt are exposed. The powerful brought down…” 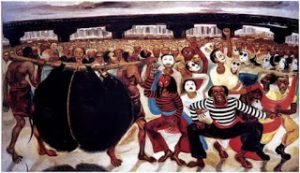 Yin: “Paintings should not be just pretty pictures; they must say something.”  said Djoko Pekik , dubbed the billion-rupiah painter when his iconic “Berburu Celeng” sold for over 1 billion rupiahs.

His years as a political prisoner did not dim his defiance nor diminish his sense of social justice. His art pieces (paintings and sculptures) speak louder about the injustices and corruption around us than mere words can. 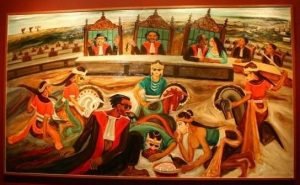 His piece “Pawang Pun Kesurupan” describes the state of the Indonesian Nation – his bitterness about the conduct of Indonesian leaders. “When corruption prevails among leaders, a painter should respond by exposing them,” said Pekik. 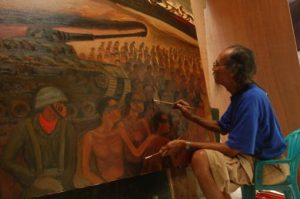 “Buaya” tells of the exploitation of the locals by the Americans in Freeport – the largest goldmine in the world then.

Art is Pekik’s medium of protest. 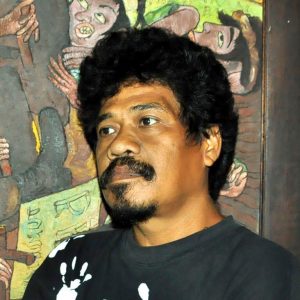 There are other Indonesian artists who also wear their hearts on their canvas;  like Budi Siagan, Bambang Soekarno and others.

Protest Art has a long tradition.

Picasso’s “Guernica” protested the deliberate bombing of civilians in the Spanish town of Guernica. It is regarded as the most powerful anti-war statement of his time.

In South Africa, Michael Maapola’s work depicted the immorality and cruelty of Apartheid. His studio was torched and he imprisoned.

More recently, Susan Crile did a series of 23 paintings of the Torture in Abu Ghraib.

From Picasso to Ut to  Maapola to Pekik to Crile they have all used art as a tool of protest.

Besides beauty, art is an expression of resistance and defiance

Condemnation of the abuse of power. They also reflect society’s morals.

It challenges the viewer to find his own connections.

If I am allowed to say this without sounding sexist: Paintings are not just about beautiful girls – bimbos if you like- although that has its place.  It must also be of girls with brains and spirit;  multi-layered; darkness and light; more Sheherazade than Salome.

The aforementioned artists will agree with me I am sure, even if they may not put it in those words. 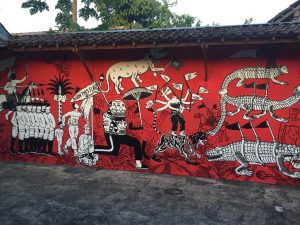 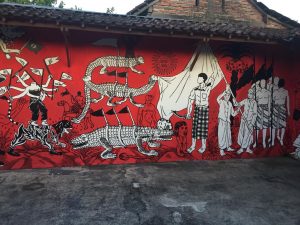 Coming to the present . . . In Khartoum, protest art appeared on walls overnight, all over the city, when news of the coup broke out.

In other cities in other parts of the world street art shout the inequality and social injustice of the system.

Besides paintings, other forms of art too play their part in agitating for change. The Moustache Brothers employed comedy and dance to criticise the totalitarian military regime in Myanmar and paid with long prison sentences.

Writers, musicians, cartoonists – the whole Arts fraternity do their bit to bring about change. Many like Maapola, Pekik and the Moustache Brothers paid the price.

Which brings me to our own country. 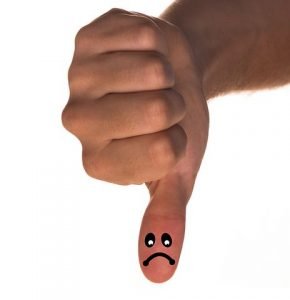 I cannot think of a painting that even hints of protest let alone open rebellion. No cries of defiance, no pricking of our collective conscience. They are largely  ‘pretty pictures’.Where are the paintings which talk about racial, gender, religious and LGBT discriminations? The exploitation of migrant workers?

It’s not just the traditional artists. Can anyone point me to a street art anywhere in Malaysia that is vaguely a protest? Oh yes, in Ipoh there is a painting of an old fogey drinking coffee who has a vague resemblance to Chin Peng. That was enough for the authorities to demand that it be painted over. Looks like our authorities have not shed their “reds-under- the-beds” mentality. Yet our government has now invited the reds into their bed to do business.

While our painters have failed, others of the Arts fraternity have had some measure of success.

Usman Awang’s seminal poem “Sahabat-ku” was a frontal assault on bumiputraism. It spoke of the racial wedge that has divided our people. It spoke of the shattered dreams of a Bangsa Malaysia . . . and more.

Yet how many Malaysians know the work of this poet laureate, novelist, playwright, rebel, maverick, activist, true Malaysian Patriot.

Usman’s work is  probably kept away from our school children in case they are corrupted by liberal thinking.

And I suspect many Malays are embarrassed by the truth of his writing for which they have no credible riposte. 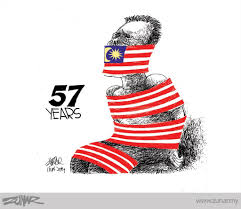 Zunar’s cartoons have caught the imagination of the nation. Unfortunately they also caught the attention the authorities who obviously don’t like his protests. 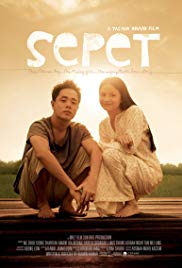 The millennials were not to be left out. Namewee, rapper, hip hop artist, composer, filmmaker and actor did his part to expose racism in the country.

The side-splitting duo of Alan Pereira and Indi Nadarajah in Comedy Court take the mickey out of everyone – politicians, religionists, Chinamen, Kelings, Melayus; no one is spared. They tear at the system and get away with it. 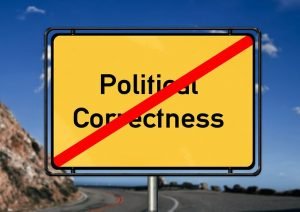 Before you crucify me for using inappropriate words – let me say I do not subscribe to political correctness for its own sake. We have used Chinaman,  Keling and Melayu for a long long time without offending anyone before this generation grew thin skinned. Despite that, we got on better than this generation with its political correctness. So there!

They have all contributed but we need more – especially from our painters. As they say; a picture is worth a thousand words.

If everyone chips a bit at the rotten political edifice, it will fall.

To be frank, we are a timid lot compared to the Indonesians or South Africans or for that matter anyone else I can think of except the Singaporeans.

Most Indonesian painters struggle to survive, yet remain true to themselves and their art. Djoko Pekik had to clean sewers for 17 years to support his family and his calling. Budi Siagan still lives from hand to mouth. Bambang Soekarno shuns his Soekarno family connection to maintain his socialist stand and for that lives modestly instead of cashing in on his connections.

In the Arts Community, it is our painters who are most timid. Many have been government sponsored; many still depend on government patronage or that of corporations like Petronas and other GLCs.  Maybe that’s why (they are timid).

I once urged my friend Koay Soo Kau, curator of the Galerie Seni Mutiara in Penang, to have an exhibition of protest art (paintings); his answer was “where will I get the paintings?”

Once ignited, cannot be extinguished

Artists (all disciplines) are more powerful and influential than they realise. Through their art the corrupt are exposed. The powerful brought down. Religious charlatans unfrocked. The marginalised and disenfranchised can be heard and seen.

Art is a slow burning fuel which once ignited, shed light on issues governments cannot ignore and are not able to extinguish.

Artists are indispensable to rebuilding Malaysia; they only need to light the fuse for change. 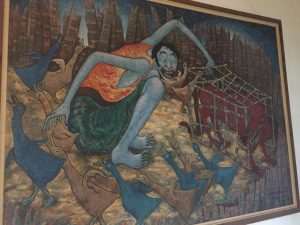