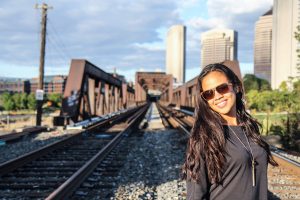 In the olden days, Malay brides were banned from going out in the sun, for at least one month before her wedding, so that she would not be too tanned, when sitting on her wedding dais.

The distant relative of a Malay, who is married to a West Indian said: â€œYour children will be hitam (black). Perhaps, it is better to adopt.â€

The colour barrier extends to the super rich. Angeline Francis, daughter of tycoon Khoo Kay Peng, claimed in a Malay Mail article, that her father disapproves of her husband, who is of Caribbean origin.

Then, as now, some of us consider fair skinned people â€œbeautifulâ€.

Why do we have this hang-up when in the west, Europeans desire to have tanned skin.

Is it because Asians think that being tanned is associated with people who have toiled under the hot sun?

The Kelantanese businesswoman, Hasmiza Othman, affectionately called Dr Vida, promotes many skin whitening products from the Qu Puteh range which her cosmetics firm, Vida Beauty Sdn Bhd, produces. Some of products have been banned, because they allegedly contain mercury. Mercury is harmful to health and can cause birth defects.

Recently, Air Asia was reported to have employed two blonde, fair skinned Australians as stewardesses. The two girls are alleged to have enjoyed celebrity status, with passengers requesting selfies with them.

Air Asia is merely exploiting our obsession with blondes, and craftily using this as a business and marketing strategy. Unfair? Perhaps. Racist? Who knows? Girls treated as sex objects? Definitely.

Some people may say it is a personal preference. Blondes over brunettes. Air Asia may wish to test this strategy further by asking their stewardesses to dye their hair blonde (or using blonde wigs) and see if the passengers prefer the new blonde look.

On one hand, we have an unhealthy obsession with fair skin and blonde hair. On the other hand, we have another obsession about being syariah compliant, with Rayani Air stewardesses being covered and tudung-clad.

Are we a nation of two extremes? One hopes that we judge our cabin crew on their efficiency and competence, not by their looks or religiosity.

The 1990s ban on TV announcers with Pan-Asian (Eurasian) looks

In the late 1990s, the Malaysian Information Minister ruled that TV announcers, with Pan-Asian looks, should not be allowed on television. Two of the announcers were former school friends and they said that the directive came from the top. So was this a politically motivated move?

Advertising is a powerful tool. As a result of Pan-Asian models, Pan-Asian beauty queens and Pan-Asian newscasters, many people, especially foreigners, thought that Malaysians were fair complexioned, and brown haired. Many local girls aspired to be like these Pan-Asian women.

Many Malaysians, and most of the rural folk, are weaned and nurtured by TV3, throughout their childhood and adult lives until they die.

They found it difficult to identify with the government messages being promoted on TV3, by Pan-Asian looking women, who did not speak manglish, but spoke flawless English, as many were educated overseas.

Was this â€œidentityâ€ criterion, one of the reasons Pan-Asian broadcasters were banned from our screens?

Today, the urge to have Pan-Asian looks is as strong as ever.

Eurasian actors and models are in great demand. Many women from high-society try to look Eurasian. Do they lack self-confidence? Are they highly insecure?

Those who do not have European genes for fair skin and blonde hair, can change their looks, easily.

Peroxides in hair colourants can turn hair blonde or brown.

Skin whiteners will lighten their skin.

Cosmetic surgery can reshape their eyes.

A boob job will give them the Jayne MansfieldÂ  figure.

Their flaring, wide nostrils, can be â€œtrimmedâ€ with a nose job.

BUT… their children will be born looking thoroughly Asian. Er… Did they not realise that?