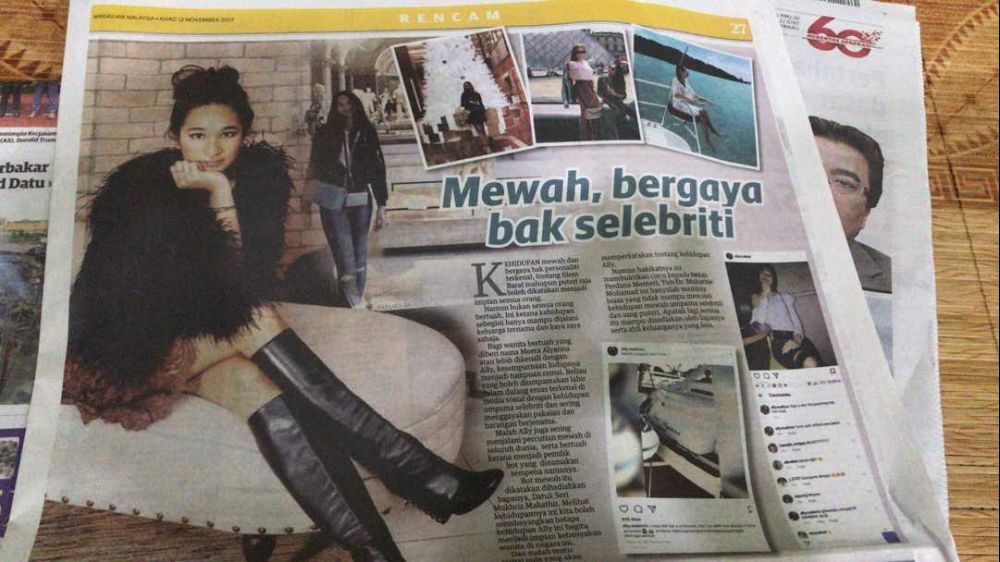 Someone in Putrajaya is afraid.

He fears the threat posed by former PM, Dr Mahathir Mohamad, that he and his media circus, are now clutching at straws.

Last week, Najib Abdul Razak’s fear of Mahathir prompted him to launch a coarse and verbal attack on both Mahathir and the Opposition. Hurling insults like “Kepala bapak kau” does not endear him to the rakyat, although the MCA audience seemed to relish Najib being rude. Perhaps, they have a poor understanding of Malay .

In the article, which is  headlined  “Meera Alyana Mukriz’s celebrity lifestyle”, Meera’s fondness for designer fashion and that she spends much time on a luxury yacht, was calculated to make us angry with Mahathir.

Instead, the article has repulsed us.

Making personal attacks against a young woman, who is neither a politician nor his spouse, is overstepping the mark. Najib is clutching at straws.

By all means, launch attacks on Mahathir or Mukhriz. They are politicians, but attacking Mahathir’s grandchildren is wrong.

Meera does not control the purse strings of the Putrajaya treasury. But Najib and FLOM do.

She is not supposed to but FLOM has the use of the government jets to fly her to the luxury shops of Europe and America for jewels and handbags.

Money from 1MDB was allegedly used to buy diamonds. This is the rakyat’s money.

MO1 is mentioned in the American Department of Justice probe.

Najib’s stepson bought million ringgit homes and apartments in London, New York and California, and some spare cash for a film company. Money from 1MDB.

Did he save since his teens?

Najib has a monthly gaji of RM 23,000 , but the flowers for his daughter’s wedding alone, cost a few million ringgits. Twedding of the decade cost a  small fortune.

Perhaps he will try to convince us that he started saving for his daughter’s lavish wedding, since he was a teenager.

“Your father’s head” Najib. You and your inner circle are clutching at straws trying to discredit Mahathir. Unfairly targeting Meera, shows your desperation.

That can only mean one thing.