MAJU is the acronym for Malaysian Action for Justice and Unity. It was launched on 28 August by lawyer, Siti Kasim. The members of its advisory committee are Tajuddin Rasdi, Lim Teck Ghee, Patrick Teoh, Tawfik Ismail and Joe Samad.

MAJU sets out to create a Voice for the People, by having citizens as Supporters. Its founder and advisors intend for it to be the organisation to change the social and political landscape of the country towards a progressive Malaysia. Its site is here. Its first talk was held on 13 November, 2019.)

The crowd is huge, way more than Maju, led by Siti Kasim, expected.

They originally scheduled it for the smaller hall in KLSCAH that can hold up to 250 people. But the response has been so overwhelming that they had to move the venue downstairs to the large hall that takes up to 2,000 people.

Even with the larger space, the place is almost fully packed.

People have reportedly come all the way from outside of KL and Selangor.

However, the majority in the crowd comprises non-Malays and those above the age of 50. 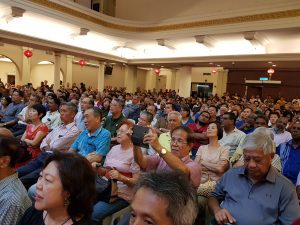 This doesn’t bode so well for the new movement which aims to empower Malaysians.

Siti Kasim announces that Maju’s membership has reached 1,000. One hopes it has substantial Malay support among them; otherwise, it may find it hard to make much headway. Even though, as Siti Kasim declares, Maju aims to be apolitical.

So, those who are hoping for Maju to emerge as the Third Force will have to look elsewhere for that.

Oh, she does talk about Maju influencing the right people to be fielded as election candidates but that sounds up in the air.

She finishes her speech without giving any idea of what concrete plans Maju intends to implement.

Tajudin Rasdi speaks a lot of sense, as usual. But his speech is very short.

His first message to 18-year-olds who will be voting in due course: This is your country. Not Umno’s or PAS’s or Mahathir’s. Very true.

His message to all Malaysians: Any attack on a minority group is an attack on Malaysia.

Siti, in answering a question from the floor, now spells out what Maju is set up to do. It hopes to have a branch in every state to which people could go and seek advice on what to do with their complaints and how to have their voice heard.

Its plan is to build up a membership huge enough to have a huge voice. So that whenever it issues a statement, it will be backed by huge numbers.

“We are a citizens’ force,” says Siti. “We are not a political party. We want to be a group applying pressure on the politicians.”

Hmmmmm …. how do you bring about effective change, establish the right values in society, make Malaysia a progressive nation without being directly political?

All said, I think Siti Kasim deserves admiration and encouragement for what she is setting out to to do with Maju. I totally agree with the principles she espouses, and the things she expressed at the event are what I believe in too. I hope as time goes on, she will find a concrete direction for her movement so that Maju can be a force to reckon with.

I think it would be important for Maju to get strong support from the youths of the country, of all races, and for it to convince them to see themselves as truly Malaysian.

Another thing to address is the issue of religion. One person asked a question from the floor that was very apt; the crux of it related to how moderate Malays in Maju would react to extremist Muslims on issues regarding Islam. How indeed would they?

The road ahead is tough. I wish Maju the very best.

Kee Thuan Chye is the author of The People’s Victory, available in major bookshops in Malaysia. 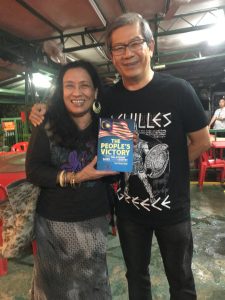 NB: The video and photos are Kee’s.

Editor: Have you any suggestions for MAJU to help Malaysia?