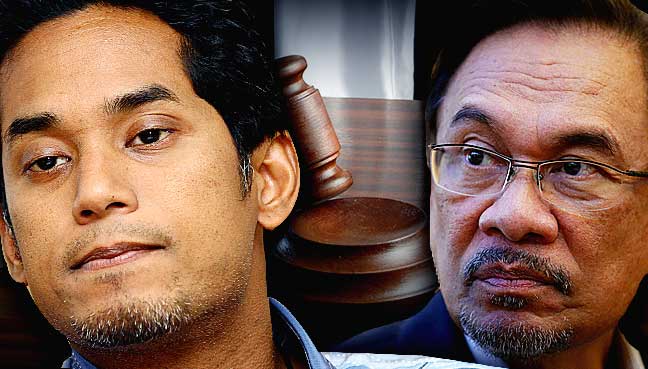 Sometimes, the past can return and bite you on your bottom. Ouch!

Cast your mind back to February 2015. The Sodomy II trial which finally nailed former Opposition Anwar Ibrahim, has just ended. Anwar is jailed. His earlier High Court acquittal was overturned. He is thrown into Sungei Buloh prison, to serve his five-year-sentence.

The lead prosecutor, Muhammad Shafee Abdullah, was roped in by Najib Abdul Razak, who for reasons known only to himself, decided NOT to use the government’s own Public Prosecutors.

The rakyat, Anwar and the whole world awaits a response from Najib and Shafee.

So far, there is no news from them? Why not? This is a serious allegation.

Anwar is jailed. He had been tried, and convicted.

So, why was it necessary for Shafee and the Sports Minister, Khairy Jamaluddin, to go on a roadshow, throughout Malaysia, to convince the rakyat of Anwar’s guilt. If my sources are correct, Shafee took his roadshow to London to shame Anwar in front of Malaysian students and Malaysians working and living there.

The despicable duo were trying to convince the public that  Anwar’s guilty verdict was justified .

Below are excerpts from various news reports at the time.

The duo wasted no time in a total humiliation of Anwar and the first roadshow started on Feb 17, one week after the Federal Court upheld the opposition leader’s conviction and prison sentence. They streamed the Kelana Jaya roadshow live.

Journalists checked their court transcript on the in-camera evidence, and found no mention of this supposed foreplay.

One person who went said, “People walked out. They wanted to hear legal reasons, not lascivious and lurid stuff, fed by Shafee’s warped imagination.”

Audiences stayed away from subsequent roadshows, and the government cancelled its sponsorship; but both Shafee and Khairy continued regardless.

Shafee told his audience that he took “no pleasure” in the Federal Court’s decision to convict Anwar, because “a young man’s life has been wrecked.”

He also said, “I know that justice has finally been done, so I am professionally satisfied with the result.”

He told reporters that Anwar was a “coward“.

Really Shafee? The SR allegation puts a different complexion on everything.

Let us be the judge of your “professionalism”, once you tell us about the SR allegation.

Not a story about politics

As for Shafee, his words about the trial will now haunt him.

Claiming that this was not a story about politics, but a “human story”, he then said, “This is a story about all men, regardless of their power, being equal before the law.”

The story has nothing to do with politics, power and  justice. Really? Kindly explain how the RM9.5 million allegation fits in with the broader picture?

Sports minister handling of the “truth”

At the roadshows, Khairy who is also the Umno-Baru Youth Chief, would speak before Shafee. He explained that they invited Shafee to “bring the truth” and confirmed that BN will no longer keep silent on the conspiracy charge.

There is more to the conspiracy charge, which in 2015, the whole BN machinery was trying to kill.

Shame on you Khairy! When the time comes for an Umno-Baru leadership contest and your name enters the ring, we will remember your poor judgment of participating in Shafee’s porno-roadshow.