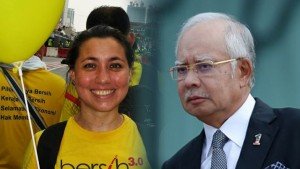 Najib Abdul Razak is like a balloon. He is full of hot air, hollow in the middle and easily punctured.

More on balloons, including the over-sensitive balloon at:

Bilqis Hijjas is a dance producer and more importantly, a courageous woman.

On 31 August, she dropped yellow balloons with the words â€œjusticeâ€, â€œdemocracyâ€ and â€œmedia freedomâ€ from an upper floor of Pavilion, a shopping mall in Kuala Lumpur, and was today, charged with “insulting behaviour” which could affect public order.

So what happened that day?

Down below, on the ground floor, Najib and the ‘self-styled’ “First Lady of Malaysia” (FLOM), Rosmah Mansor were at a function.

The yellow balloons were not pumped up with helium, so they floated down, to the ground floor.

As they floated down, it must have been like watching a slow motion sequence of a fast packed action movie……the seconds leading up to the high point of the drama…

The spectacle of three yellow balloons, slowly floating down towards him, must have been agonising for the PM…and The FLOM.

Najib must have thought…..arghhhhh…..yellow….Bersih 4….what if the yellow balloons hit me…..

He need not have worried.

The balloons did NOT hit either of the First Couple of Malaysia (FCOM). They landed behind a screen…..

The fact that Najib had to endure several agonising seconds of yellow blobs floating towards him, must have made him apopletic… well if it didn’t move him, it must have infuriated the FLOM.

One can imagine children at the mall, having to endure a politician opening another function being distracted and saying….”Look. Yellow balloons… yey yey yey….”

One can also imagine adult heads, straining their necks, looking up, towards the balloons.

One can also imagine the FCOM, pretending not to notice… staring straight ahead, not daring to look at the yellow balloons, praying hard the balloons won’t hit them.

Bilqis Hijjas was picked up by the malls security guards and handed over to police. Shame on them!

At court today, Bilqis was charged with â€œinsulting behaviourâ€ which could affect public order.

Insulting behaviour? Who is the one who insults the intelligence of the rakyat with the missing billions, the RM2.6 billion donation from a foreigner, and the allegation that GE13 was paid for with money from dodgy corruption deals?

The red shirt rally was to distract and take our attention away from 1MDB. Shame on the red-shirts!

Set Bilqis Hijjas free. She is not the one with “insulting behaviour”.