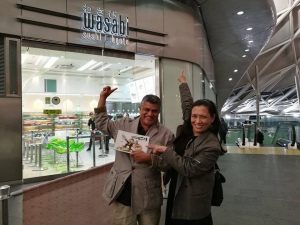 Did any one in authority think that imposing a travel ban on Zunar, would make him back-off, in the fight against corrupt officialdom?

Will the latest curb on his freedom, force him to store away his writing materials and drawing pad, for a more peaceful life? Hell no!

Support Zunar and other activists

We should not back away from supporting individuals like Zunar, activists, students, human rights NGOs, journalists and Opposition supporters, who are calling for a return to democracy and the rule of law.

Zunar was stopped from boarding a flight to Singapore, to attend a forum. An immigration clerk told Zunar that he was not allowed to travel out of Malaysia, because of “sebab khas” (a specific reason), on which he declined to elaborate. The order came from the Inspector General of Police (IGP), Khalid Abu Bakar.

This is the latest harassment to befall Zunar, in his longstanding run-in with corrupt Malaysian Official 1 (MO1) for mocking the authorities, and for highlighting the widespread corruptionÂ  and abuses of power, which are crippling the nation.

Why has the Director-General of the Immigration Department taken it upon himself to ban Zunar from going overseas? Eric Paulsen, from ‘Lawyer for Liberty’ has said that this is a “serious infringement on his civil liberties under Article 5, right to life and Article 8, equality”.

Zunar has done no wrong. He is only guilty of expressing his opinion. This is not a crime.

He has not been charged in a court of law, and although he has been slapped with nine charges of sedition, the trial date is not till 22 November 2016. So, why impose the travel ban?

Under what power has he been stopped from leaving the country? The Pengarah of Immigration is the poodle of the IGP and the IGP is exceeding his authority, despite being the lapdog of Najib.

Upon further investigation, an anonymous contact in the Immigration department confirmed that the instruction to forbid Zunar from travelling overseas, had come directly from the IGP. The source said that the travel ban had been put in place on 24 June 2016.

The Immigration can only impose a travel ban if and when someone has been charged in a court of law, for an offence like murder, or has not paid his income tax.

MO1 and his spouse have damaged reputations and Zunar’s drawings, have made an indelible visual impact on the international community and stirred our consciences, to act against corruption.

The arrogant IGP is spoiling for a fight. He probably treats Zunar’s response like a personal vendetta and told reporters, “He (Zunar) can challenge me, if he wants.”

Khalid does not show any professionalism, but reveals himself to be like a street thug.

Why is the Pengarah of Immigration, practising double standards?

Someone like Jamal Yunos, the thuggish leader of the Red Shirts who has been harassing members of the public and the Bersih officials on the road trip is free to pop in and out of Malaysia.

All the more reason for us to support Bersih and demand a return to parliamentary democracy, free speech and a free press, amongst other things.

Zunar has been hounded because his work is effective in highlighting the many corruption scandals, both in and out of Malaysia.

Please support Zunar in his fight to regain your basic freedoms.