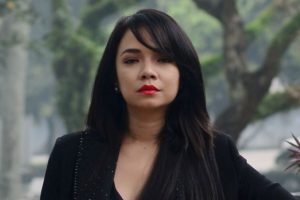 The actress, Nora Danish, who is alleged to be “an item” with Nedim Nazri, the wild son of Tourism and Culture Minister Nazri Aziz, criticised  the people who had distorted her request, for a tax break for celebrities (Malay: sleb).

Slebs need a tax break to “maintain their attractiveness”.

For the curious among you, yes, Nedim is the young man, who allegedly beat up a security guard at a posh apartment in KL, when asked for his IC and he allegedly claimed he was royalty and so, need not hand in his particulars. He was also the one which Sarawak Report once reported, driving a Hummer “loaned” by Sabah timber baron, who was caught at an airport with a suitcase full of money. (Normal for people who do not trust banks and carry their life savings around wherever they go.)

On Monday, the 34-year-old actress posted in her FB page, that she had been â€œscolded (kena marah)” for her suggestion.

A furious Nora vented, “I will find out who tried to sensationalise the newsâ€.

Nora urged the Inland Revenue Board (IRB) to “consider her tax exemption proposal on grounds that celebrities today spend large sums to maintain their good looks in public.”

Acknowledging that Malaysian citizens have a responsibility to pay taxes, she said that slebs should be given a tax exemption because they need to keep-up “appearances and personality in public”.

She said, â€œThis (maintaining our looks) is part of our occupation and perhaps it can be counted under occupational costâ€.

And some slebs use a ton of foundation to mask perfections and still look awful.

One wonders! Our politicians are also heavily reliant on their appearance in public, especially on the international stage.

They wear bespoke suits (one suit can cost minimum RM20,000). They travel and dine in style.

Some political spouses, must be decked in fine jewels, but the taxpayer need not worry, because she started saving as a teenager.

One political spouse probably received a tax exemption for their anti-ageing treatment. Can’t say we notice any improvement.

Politicians’ wives who accompany their hubbies, need to look good. The comb, the lipstick, the tissues, the mascara, the breath freshener spray, can be crammed into a roomy Hermes-Birkin bag. Must give tax exemption lah. Or else!

Back to Nora and the slebs.

The IRD may possibly consider their request if they were made, on medical grounds:-

The botox jobs, the eye fillers, the face tucks, the boob jobs, the nose reduction, the hair weaving (men with thinning hair), the bum reduction, the lipo-suction, the boob enlargement, the epilation (hair removal on upper lip, legs and sensitive areas), the trout pout, the double eyelid…

Nora, who is also a model-turned-entrepreneur and owns a headscarf line called Owl. She would make a good ambassador for her own tudung line but she does not wear a headscarf.

Nothing unusual in that, I suppose. One PM’s son was allegedly a major shareholder in a beer company, San Miguel, and one former IGP, is alleged to be a director of a casino, perched on a hill in Malaysia. Muslims are not supposed (not in Msian public at any rate) to be boozers or gamblers.

Can bloggers or columnists request a tax exemption having to counter threats from cybertroopers?

What about tax exemption, for criminals and their tools – like crowbars, parangs, machetes.

Being a politician is hard work. Many unwind at the ‘rumah urut moden’. R&R should be tax exempt for politicians.

Tax exemption for clothing, handbag, shoe and travel for politiciana, whose families must look successful.

Know of other professions which need tax exemption?