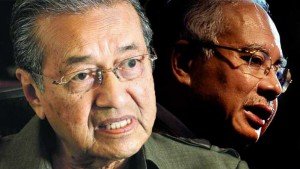 A furious Najib Abdul Razak criticised the alternative media for their “unhealthy journalism”, and for creating their own version of reality.

He lumped news portals with keyboard warriors and cyber-troopers. He accused them of serving their own agendas.

Has Najib forgotten something?

One. He, his Cabinet and his followers live in cloud cuckoo land. They live in a make-believe world where there are no price rises, no hardship, no dissent (all yes men around him).

In cloud cuckoo land, there is no corruption, only donations. It is like reading the “Tales of The Arabian nights”.

In Najib’s make-believe world, donations become deals, which magically become “dunnos”… “I dunno about that donation lah. Did it appear in my account? How come? Deal is it? I also dunno lah.”

Two. Najib kept very quiet about his own cybertroopers.

This is probably in preparation for GE-14 and Najib has admitted that the Internet was partly responsible for BN’s losses and reduced majority in GE-12 and GE-13.

In August 2015, Najib urged the formation of more keyboard warriors, to tackle the issue of perception versus reality. The report about Umno-Baru cyber-troopers is here.

How about this? Former PM Mahathir Mohamad said that Najib’s government is afraid of the truth and that is why “The Malaysian Insider” (TMI) was blocked.

Mahathir said that Malaysia is on its way to becoming like the “dictatorial North Korea”.

He said, “… people are afraid that if they say something or do something against Najib, you will be arrested, detained or charged in court.” (sic)

Oh dear! Forgetfulness is contagious. Even Mahathir appears to have forgotten about Operation Lalang. In 1987, when he was PM, he banned Sin Chew Daily, The Star, and Watan. Individuals were housed in a fully furnished (very basic), Government run resort, their meals and entertainment provided. This place is called Kamunting.

There is a Malay expression. Dua kali lima. (2 x 5) These two are as bad as one another. Reject both and anyone who learnt from them.