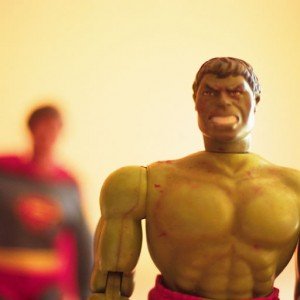 Malaysia Boleh! If America can have superheroes, Malaysia can, too. Youâ€™ve heard of Batman and Robin, the boy wonder. We have Jab-In (an anagram of a notorious Malaysian) and his side kick, Butt-Man (you know who!).

The American SuperHeroes are crime fighters; ours are alleged to be the perpetrators of crime. The Americans wear tights and some of them, wear their underwear on the outside. Their underwear is clean, but Butt-Manâ€™s underwear is spattered with semen and according to one cynic, â€œâ€¦from a whole football team, tooâ€.

If anyone deserves to be called Superman, it is Anwar Ibrahim. The Government appointed prosecutor, Muhammad Shafee Abdullah claimed that Anwarâ€™s semen was found here, there and everywhere. Anwarâ€™s semen thrived longer than most other semen samples. Whilst other seminal fluids needed proper refrigeration for storage, Anwarâ€™s survived in an ordinary office cabinet.

Despite the poor storage conditions, Anwarâ€™s semen was still alive, and swimming. They gave the â€œright readingâ€ according to the chemist, Seah Lay Hong, despite the semen having no tails.

The thought of tail-less armies of semen, wandering aimlessly in Mohd Saiful Bukhari Azlanâ€™s bowels, and giving out strong signals, is like a horror movie. Anwar should not be called Superman, instead he should be renamed SuperStud.

On day one of Anwarâ€™s appeal, Shafee had tried to establish a romantic link between Anwar and Saiful. He said that Anwar had given Saiful an expensive Brioni suit.

Those who have been invited on official visits, to a tiny sultanate on the island of Borneo, were allegedly given diamonds as presents. The sultan of this tiny principality cannot have been romantically linked to all his guests, could he, Shafee?

Shafee rejected the testimony of a defence witness, the Australian, Dr Brian McDonald, whom he called â€œan armchair expertâ€. Later, Shafee tried to present an article in Thai, but a defence lawyer objected, and his objection was noted by one of the five judges. Shafee continued regardless, until another appeal judge stopped him and said, â€œFor all we know, it could be against a chickenâ€.

Then, the prosecutor tried to discredit the doctor, who had examined Saiful, after he claimed that he had been sodomised. Dr Osman, whom the prosecutor called â€œunreliableâ€, was blamed for leaving his DNA all over Saifulâ€™s peri-anal region.

Shafee said that Dr Osman may have used his fingers and not a gloved hand, or a proctoscope to examine Saiful. He claimed that there was no evidence that the proctoscope used was sterile, and said, â€œThere is no evidence whether Dr Osman wore gloves as he was all over the anus of Saiful. There is possibility that Osman’s DNA is deposited on Saiful.â€

Isnâ€™t Shafee guilty of character assassination by undermining the professionalism of the doctor?

Shafee need not worry about retirement, as he would make a good stand-up comedian. Outside the court, around 50 Saiful supporters, their RM30 attendance fee, safe in their wallets, carried banners and directed their wrath at Anwar, whom they claimed had tarnished Islam. They shouted, â€œWe must fight against those who soil Islam.â€