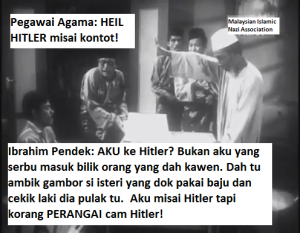 Guest Contributor, Farouk A Peru slams the moral police for raiding the hotel room of a married couple.

What else can you expect when nincompoops run a nation? While UMNO leaders are busy ingratiating themselves to PAS and other religious conservatives in order to protect their position before GE14, Malaysia is now falling deeper and deeper in the pit of religious opportunism.

JAWI (The Federal Territories Islamic Department) is now rightfully being sued by a couple for conducting a raid in a way that would make the Gestapo (the Nazi secret police known for their brutality) themselves seem like the Samaritans!

Before we even get into that though, Malaysia made the world social media news this week not once but twice.

We are now the world leaders in Islamocapitalism. Islamocapitalism is defined as the shameless profiteering using Islamic cultural symbols. In Malaysia, this particularly sells very well, given the Malay propensity to love all things Islamic even when they’re really not Islamic but rather conservative Arab culture.

The other Mile-High Club

The first Islamocapitalist is the Mile High Qira’ah (Quran reading) Club. For a cool RM33,000, you can experience the joys of learning to read the Quran in the comfort of a private jet. It is not known if one will actually be taught the message of the Quran.

For 33K, I would have expected at least some secrets of the Quran to be revealed but I don’t think that’s how it works. Rather, you have this champion qari’ah (female Quran reciter) who will literally scream the Quran at you hoping that you would be eventually be able to sing it like her.

This company claims that they give part of their profits to orphans and needy. Great, but do you need to make the money with this pointless exercise in order to do that?

Muslims are very charitable people. They don’t need to burn plane fuel to give for the sake of Allah. Maybe what you’re really about is the moolah, not Allah.

As if this flying joke was not sufficient, Malaysia now has the first ‘prayer valet’ (Valet Doa). For a fee far too exorbitant for its value, you can get this religious con artist to go to various sites in Mecca to say whatever prayer you tell him to. That’s how it works, you see. God is not merciful enough to grant your prayer from the comfort of your own home, you actually need to visit a holy city to make the prayer more ‘powerful’.

Even JAKIM, who are not known for their skills in critical thinking, have voiced disapproval.

This ‘prayer valet’ actually says ‘Islam does not prevent this’. Of course it does not because there is no compulsion in religion. People are free to be gullible if they want to. However, in my understanding, this religious con job goes against the very spirit of the Quran. The Quran places emphasis on good works. It never tells you to go to Mecca to pray but it does tell you God is the hearer of prayers.

One would assume this attribute works outside Mecca as well. So for everyone who needs a prayer, I humbly suggest you exert maximum effort in life and then pray. Please ignore this ‘prayer valet’ con artist.

There two examples above merely showcase buffoonery and while they are embarrassing, they are not so dangerous, quite unlike our highlight event for the week.

According to this news report and allegations made by the plaintiffs, JAWI officers raided a budget hotel in KL and found a couple who later turned out to be married.

The couple pleaded for time to get dressed but instead, the eight officers forced their way in. They directed the wife to get dressed while taking photos and videos of her! As for her husband he was treated violently by forcing him in a chokehold causing injuries to his neck.

Although they presented their marriage identification card, the JAWI officers refused to accept it. After a great hullabaloo, they took the couple to a police station where they were reported for a khalwat offence. They were then taken to the JAWI office till the husband’s mother came and presented the original marriage certificate (also issued by Jawi themselves) but they refused to release the couple till the husband’s mother signed an RM3000 bond.

One wonders what document they would have accepted, perhaps a divine mandate from God, falling from the sky?

This incident above is simply unacceptable. And this is before RUU355 is tabled in parliament, which could potentially make the Islamofascist syaria laws even more damaging than they are now.

These religious officers from various states have the audacity to act like sadistic animals because for far too long, conservative Malay Muslims have not dared to speak up against them for fear of sins or what not.

Our weak politicians, who are too afraid of losing the conservative vote will not squeak either.

It is our duty as Malaysians to vote them out and move towards secularising Malaysia fully.

Let conservative Malays pay for the salaries of these mat skodengs and we will see how long they last.

By Farouk A. Peru, Islamologist and writer.