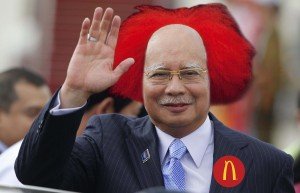 Some clowns can multi-task. The Chosen One is also a magician. His circus act is not funny. No one is laughing. He brings much misery to many.

As a magician, he can allegedly make money appear, like the RM4 billion donation and the RM15 million in the newly appointed Kedah MB’s office the day after he was installed.

He can make things disappear… like integrity, transparency, accountability and responsibility, and allegedly, people.

The Chosen One does not realise that the Australian journalists who were detained last Saturday confirmed what we already know about our nation.

That our Cabinet is a circus.

That the events organised by our officials are a circus.

That when the PM is involved, the people around him act like they are part of a circus troupe.

The authorities can’t even agree on a reason for the arrest of the two ABC newsmen.

National Security, was cited, just like when they blocked “The Malaysian Insider”.

Someone else said, the reporters posed a security threat.

Another said that the Mat Sallehs had been aggressive. We know that anyone who disagrees with the authorities and who dares to ask them questions, are termed “aggressive”.

Another said, they broke a security cordon, which from video footage, we know does not exist.

Who would want to kidnap The Chosen One?

Then a bright spark said that they feared The Chosen One would be kidnapped???

Will anyone pay the ransom?

It may even work the other way round and people pay the kidnappers money, to keep him. Ooops!

Australian said it was a circus

The Australian Broadcasting Corporation (ABC) reporter Linton BesserÂ described his and his colleague’s detention and subsequent release as a circus, and said,

“A circus. First I hadn’t registered for the event, then I had been aggressive, then I breached a cordon. Now this.”

Linton Besser, the reporter who was detained with his cameraman had attached to his tweet a screengrab of a quote from the Domestic Trade, Cooperatives and Consumerism Minister, Hamzah Zainuddin.

Hamzah claimed that tighter security controls were needed around The Chosen One because of kidnap.

Hamzah is the minister who said that people who raised the prices of their goods, did not believe in God.

Another clown in the largest circus on earth!