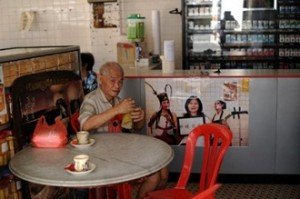 Are you the â€˜know-it-allâ€™ uncle, or auntie whom everyone dreads at a family gathering? You sit down for a makan, but before the bowl of rice has been passed around the table, â€˜uncleâ€™ has already upset a few family members with his strong opinions on politics in Malaysia.

You have seen versions of these scenes:

A seemingly harmless comment by a teenager about PAS banning certain concerts, prompts â€˜uncleâ€™ to talk at length about drug-taking youths and sex in the stands.

An aunt who wants to take advantage of a cheap travel package to Moscow is accused of being a communist-lover.

A nephew who questions the building of another white-elephant, is told that it is â€œUmno Baruâ€™s money, so what does it matter?â€ However much the nephew tries to correct him, â€˜uncleâ€™ is dismissive and the teenager sits throughout the meal with a scowl on his face.

Could your casual remark at the kitchen table be used by any of the political parties to dictate party policy?

Which type of political commentator are you?

He does not need anyone to start a conversation. He can look at a plate of kangkung belacan on the dining table and he will expound on the feelings of Pakatan. When he has completed commenting on the oppositionâ€™s faults, he will start on Najib Abdul Razak. He will accuse Najib of not knowing the rakyatâ€™s suffering. By the time he is finished, the kangkung has gone cold and the diners have left the house, for a take-away.

He loves the sound of his own voice and dismisses the opinions of other diners, when they try to interject. He continues full-flow, and is pleased the others have finally come round to his way of thinking. He finishes speaking, and realises why he was allowed to speak, without interruption. They punished him by finishing all the food.

Even when this dinner companion is told about the corruption, the injustice, the deals which enrich the cronies, he just says, â€œDonâ€™t worry, everything will come right in the end.â€ â€˜The ostrichâ€™ may be in denial and his reaction is a buffer for his true feelings.

â€˜The pessimistâ€™ cannot countenance any suggestion for better governance or reform. For him, it is all doom and gloom. He says that PAS is only concerned about preparation for the after-life, PKR are Umno Baru rejects and DAP need only change its first initial to P, with Lim Kit Siang officially acknowledged as the Malaysian alter ego of Lee Kuan Yew.

Listening to â€˜the pessimistâ€™ talk, is depressing and even the most tasty dishes remain untouched.

He will boast that he knows the leaders of the nation, the Special Branch members by their first names, and is regularly â€˜taken-inâ€™ for questioning, for his radical views. He does not believe electoral reform will work in Malaysia, and can think of only one solution to solve the political impasse.

Any suggestion for reform is always deemed impossible because of racial considerations. He may agree on meritocracy in education, but after a few seconds, will change his mind, because he will say, that the schools and universities will be dominated by non-Malays. Convincing â€˜the racistâ€™ is a slow task, that requires god-given strength, but the reward is worth theÂ  effort.

When you mention the opposition coalition, he will say, â€œYou mean Anwar? He was jailed twice for sodomy, so the charges must be true.â€ Umno Baruâ€™s 58 years of indoctrination have been successful, and attempts at steering the conversation away from Anwar by introducing the other major reformists in the party, will frustratingly lead back to Anwar.

Despite his known connections with Umno Baru and BN, he appears to agree with you about the wrongdoings of Umno Baru, and he will be the first to suggest reform. He is the consummate businessman and has his feet planted in both the BN and Pakatan camps. He panders to both coalitions, and his allegiance is linked to business opportunities. Is he principled? No.

He does not know what is happening in Malaysia. He confuses all the political parties. He does not know the leader of any party, nor can he remember the date of the last election. What he lacks in political integrity, he makes up for in his knowledge of good food, drink, and his funny anecdotes. He is the best dining companion.

So… which one are you?

Perhaps, you have a few to add to the list above?