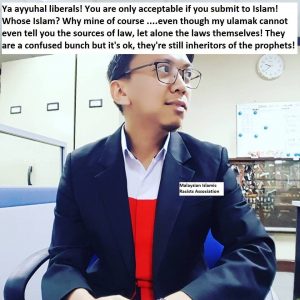 Read Farouk’s article and share your views. Would you agree with ISMA’s version of Islam?

I find it very strange that these ISMA types have the sheer audacity to say what they say. Earlier this month, I encountered Zaid Z Rashid who wanted me to adopt â€˜proper methodologyâ€™ when his own university gave a fartwah saying that male and female couples who were unmarried could only sit together if man SUCKLED the woman five times! This is where â€˜proper methodologyâ€™ gets you.

Another confused individual is Danial Ariff Shaari. Danial does not know whether he is coming or going. He appears to be utterly confused about Islam, the constitution and his own views! But really, who can blame him? He is an ISMA activist, the organization which doesnâ€™t know whether they are fighting for Islam or Malay supremacy. Very confused organisations breed very confused activists.

In Danialâ€™s latest rant against the liberals, he seems very offended (millienials call it being â€˜butthurtâ€™) at the comments made against him. He asks â€˜Why so much hate? Arenâ€™t you all better than this?â€™ Rest assured Danial, we donâ€™t hate you. We simply oppose your fascist vision. Please donâ€™t be surprised that people oppose Islamofascism which seeks to control every aspect of lives. You should be smarter than that.

Danial asks, for example, when he declared hatred for being called â€˜fascistâ€™ yet in his previous piece on Ismaweb, he was indignant about being called an Islamofascist! With great resent, he asked â€˜Oh. So Muslim religiosity â€¦ in Malaysia (??) â€¦ is a form of â€œfascismâ€, is it? It seems he employs a literalist, one dimensional approach to language. I would have thought lawyers understand the concept of interpretation.

In the very next paragraph of this latest piece, he declares support for JAISâ€™ fartwah calling for the ban on liberal Islam by labelling them â€˜deviantsâ€™. Isnâ€™t this the very definition of fascism â€“ the oppressive ideology which seeks to suppress others? Danial does not even know heâ€™s an Islamofascist! Confused much?

One of the glaring traits in the Islamofascistâ€™s language is their depiction of Islam as a single entity (their Islam, of course!). Danial says, â€˜There is no such thing as liberal Islam, and liberalism can only be adopted if it submits to Islamâ€™.

This is either a very sly manoeuvre or total self-delusion. When Danial says, â€˜there is no such thing as liberal islamâ€™, he is saying that Muslims have no right to disagree with conservative scholars. And who put conservative scholars in charge? The Prophet? Not at all. They are self-styled â€˜scholarsâ€™ (the Quran calls them â€˜priestsâ€™ â€“ see 9/34) who cannot even tell you the correct sources of law (usul al-fiqh), let alone the laws (ahkaam) themselves. Yet they claim to be inheritors of the Prophet!

When Danial says â€˜if it (liberalism) submits to Islamâ€™ what he really means is â€˜if it submits to USâ€™. This is what itâ€™s really about â€“ power. These people wish to make themselves relevant in a world which has long since passed them by. They can actually be relevant, if only they let go of their religious mumbo-jumbo.

Danial is very opposed to the idea that Malaysia is secular in nature, but he fails to understand that the word â€˜secularâ€™ is merely a description to show that an entity is not driven by religious elements.  I would have thought his legal training would have helped there.

The Federal Constitution is Supreme

In Malaysia, our federal constitution reigns supreme. The first interpreters of the Federal Constitution, including the first Prime Minister himself had no misgivings about it at all. Tunku Abdul Rahman totally disclaimed that Malaysia was an Islamic state! Here was the man who actually had interaction with the formulators of the constitution. He could have asked them if it was meant to be an Islamic state and they could have corrected him. Nothing of the sort happened for a very simple reason â€“ Islam is merely the official religion of the federation. We are not and have never been an Islamic state in the classical sense of the term.

Isma and other Islamofascists harp on the aforementioned provision that states â€˜Islam shall be the religion of the federationâ€™. Islamic identities manifest in infinite ways. Why does â€˜Islamâ€™ here have to be the fascist, unthinking version of the ulamak? Islam could be the beautiful values of the Quran, social justice and freedom of religion. Does Danial support the rights of Muslims to leave Islam? If he does not, then he really does not accept this constitutional provision, only his fascist version of it.

Danial desperately also wants the Federal Constitution to support Ismaâ€™s Malay Supremacism. For all his support of Islam (not really, just his delusion about what is Islam), Danial does not really trust Allah to bring him salvation whose way of life should be sufficient. He needs Malay Surpremacism to partner with Allah. His tawheed (monotheism) is only a slogan. It does not really function in all spheres of life.

Sadly, the Federal Constitution only says that Malays have a special position. It does not ever mention bumiputra rights at all. We must go back to the venerable Tunku, who according to the Reid commission said â€˜in an independent Malaya all nationals should be accorded equal rights, privileges and opportunities and there must not be discrimination on grounds of race and creedâ€™. This was the original vision of our nation, not to have the marauding UMNO hordes plunder it while giving the dedak to keep people quiet.

In truth, Isma and also organizations like them (UMNO, PAS, Perkasa et al) are just freeloaders who wish to exploit the wealth of the nation without giving the non-Malays their dues. The Quran has a special word for them â€“ muthaffifeen (mentioned only once â€“ 83/1). These are people who give less than the value which is owed to others. Non-Malays work harder than Malays to get their benefits yet Isma has no problem denying them the rights which they worked for. They can get the maximum â€˜Aâ€™s in exams and still be denied places in universities. Is this the Islam which Danial rants about? No, itâ€™s a delusion of grandeur and itâ€™s destroying our nation.

By Farouk A Peru, Islamologist, writer.