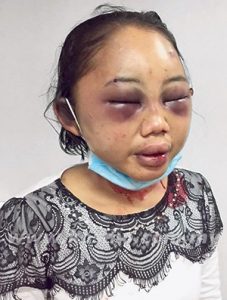 Yesterday, we read that 45-year-old “Datin” Rozita Mohamad Ali had escaped a jail sentence for attacking her maid.

Is this justice? Is the gentle punishment – the rap on the knuckles….. because she is a “Datin”?

What of the maid whom “Datin” attacked and injured? Her physical scars may fade in time, but her mental scars will be left forever.

A security guard stumbled across an unconscious Suyanti, beside a drain. He alerted a resident who rushed her to a clinic. On 30 and 31 December 2016, at the trial in the Petaling Jaya Sessions Court, Rozita was charged with attempting to murder Suyanti. The offence was committed between 7am and 12pm on 21 December at a house in Mutiara Damansara.

She was charged under Section 307 of the Penal Code for attempted murder, and she faced life in prison or up to 20 years in jail.

The photos at court, showed a composed “Datin” dressed in a black baju kurung and hijab as well as a pair of black sunglasses. She pleaded not guilty to the charge.  She did not like the media attention.

Looking at the coy and cold Rozita, you’d think that butter wouldn’t melt in her mouth, but see the photos of Suyanti (see photo) to know what she is capable of.

Suyanti was so traumatised that just before the trial started, she wanted to withdraw her report and return to Indonesia. She has been severely injured and traumatised, Moreover, she is a stranger in a foreign country, having to fight  a “Datin”, who could have been well connected. We have heard of other cases of maids who had been silenced before.

Rozita was charged under Section 307 of the Penal Code for attempt to murder. Her lawyer, Rosal Azimin Ahmad, pleaded for a bail of RM5,000 for his client, whom he said has asthma and is unemployed, but Judge Mohamad Kamil rejected this, and set bail at RM20,000 with one surety and ordered that Rozita’s passport be held by the court.

The trial started on 9 May 2017 and during the trial, we heard that Rozita had been charged with attempted murder of Suyanti Sutrinso, using a kitchen knife, a steel mop, a clothes hanger and an umbrella.

The charge was under Section 307 of the Penal Code, which had a maximum jail sentence of 20 years, if convicted. Ten prosecution witnesses were called to give evidence.

The charge was amended to “causing grievous hurt” by dangerous weapons or means under Section 326 of the Penal Code.

Wait for it…..here is the killer blow

Yesterday, we read that Rozita pleaded guilty to this lesser charge, Judge Mohammed Mokhzani Mokhtar sentenced her to be bound over for five years on a good behaviour bond of RM20,000.

Bound over for five years on a good behaviour bond? Is that it?

Some Datins splash out RM20,000 in a few hours in Knightsbridge.

Deputy Public Prosecutor V. Suloshani urged the court to mete out a jail sentence to serve as a deterrent against the accused, adding that the incident had gone viral in social media.

Rozita’s lawyer had applied for the good behaviour bond as his client had suffered from extreme pressure and stress after she was charged in court and said, “My client has repented.”

Anyone can say they repent-lah.

The Low Yat thief, Shahrul Anuar Abdul Aziz, who stole from a trader at Low Yat, and almost caused a serious racial incident was acquitted, he was also asked to repent, despite starting a riot, damaging property and injuring others.

What good is repentance to Suyanti and her family? Where is the justice?

Would you accept a “sorry” or “I repent” if someone hit you, and broke your jaw.

Rozita said she suffered extreme pressure and stress. She should have thought about bringing this onto herself when she violently attacked Suyanti. 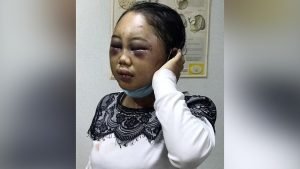 The Indonesian authorities and Malaysian public must demand better protection

The Indonesians and Malaysian public must demand better protection and laws to protect domestic workers. Last month, Adeline Lisao died after her employers abused her. Our authorities appear impotent to act.

She urged the public’s cooperation and said, “If you know someone is abusing their domestic worker, please do something. You can call the police, call a non-governmental organisation like Tenaganita or WAO, or try to talk to the domestic worker.”

“The punishment for convicted employers should be stern and heavy as a clear deterrent.”

Do you think Suyanti received justice?

Many individuals think that they are justified in beating their maids, just because they have forked out RM12,000 to procure one. Our laws are so lax that many employers get away with abusing their maids, physically, mentally and sexually.