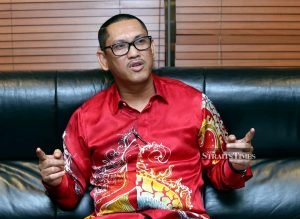 We are six weeks into the new year. We are all one year older. The electorate will be wise, but will you?

What have you got to show for 2019? I mean the positives.

The negatives we know – it’s an open secret. I won’t enumerate them one by one as I would be repeating myself. But there are certain matters you promised to put right but have not.

The most glaring and unjust deed of yours in 2019 is to take away the land that the hardworking farmers have been tilling and give it to the state footballers.

What have the footballers really done that deserves such generous treatment? In the first place they are paid handsomely to kick a ball around. Secondly they have only won a domestic competition. It’s not as if they won the World Cup or even the Asian Cup.

While I agree that their achievement should be recognised, a simple victory parade followed by a state banquet would be sufficient. If you like you can make everyone of them a Datuk . The titles cost nothing. But land from farmers cost them (the farmers) plenty. It costs them their livelihood. It impacts on their family. The State  will  also lose revenue.

The state has a huge land bank. You promised to give these farmers other pieces of land to replace those taken.  There is no reason why you cannot. After the brouhaha has died down you have done nothing – according to my sources.

This is the standard operating procedure of politicians. They all use the same handbook: “The A to Z of Politics” (Chapter 5 – How to deal with complaints”).

You have cried the lack of money when Perakians demand improvements to the state’s infrastructure. Or when the needy cry for welfare. I believe you because Perak is the second poorest state in the country.  So how come you can buy new cars for all your ExCo members?

Let’s get back to money-talk.

You have a great resource – land. There is so much land that is unused that if they are farmed they will add significantly to the state’s coffers.

Farming is a huge industry. It can bring in billions to the state. If we employ science and mechanised our farming we will not need migrant workers (keep our money in the country); at the same time we can pay Malaysians decent wages and attract the younger educated section of our population. Farming will be a ‘sexy’ employment and not be regard as merely menial work.

I know a farmer in Camerons who sends 50 tons of salad vegetables to Singapore a day. He drives a BMW.  But then that is Pahang and the money goes to that state. Why not Perak?

Even if we give out small parcels to our garden farmers we can provide employment and get revenue.

The area around Changkat Kinding and Tanah Hitam used to be vegetable farms. They supply Ipoh with fresh produce daily. Now they are housing – yet there is an oversupply of houses.

Frankly I think there is no hope for you my dear Faizal. As for your friends in PH, they can save themselves if they do the following:

1.   Kick you (Faizal Azumu) out as Menteri Besar.

2.   Immediately replace the land taken from these farmers. And open up new land for farming – make farming one of the cornerstone of the Perak economy. This is better than blasting our hills to smithereens.

3.   Be serious about corruption and cronyism. I mean be serious about tackling the problem; not getting deeper into it (I need to be clear as you guys don’t need much encouragement).

No more projects to RM2 companies, no more award of tenders to Johor companies owned by cronies. In fact Perak businessmen should be given priority over others from out of state.

4.   Keep your promise of Open Tender.

Is the DAP CAT (competency, accountability and transparency) dead? This is a DAP slogan yet as the dominant party in the state assembly this has not be kept.

5.   Now that our mayor of  7 months has left his post (promoted to State Secretary – Star Newspaper 19/12) this is a golden opportunity to appoint someone who is not a civil servant and definitely not a politican, to the post.

Be bold and imaginative in appointing our next Datuk Bandar. There are many capable Ipohites or Perakian in the private sector who can do a good job.

Pick the best person to run our town.

To keep doing something that we know does not work is madness.

I will leave it at five things. Any more will confuse your small minds.

No one wants UMNO-BN back and now with PAS in the coalition it will be an even more toxic mix.

But don’t count on our dislike for UMNO-BN to get into power again.

This government can still save itself if it does the 5 things mentioned – especially number 1.

I would like to wish all our Chinese friends ‘Happy Chinese New Year’. I am sure my pal Harussani would too.