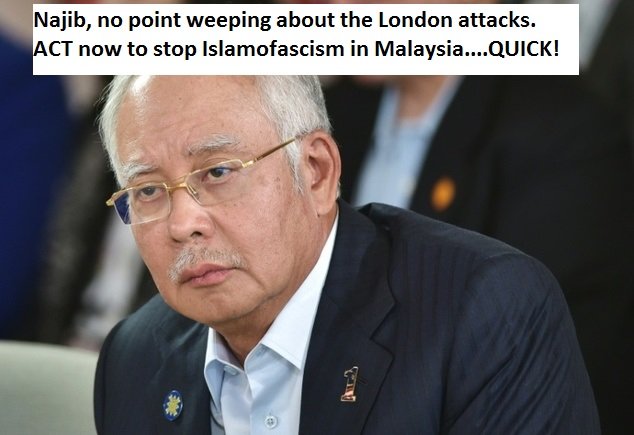 I was very touched by your ‘sadness’ regarding the latest attack in London yesterday. I have lived in London for fifteen years and travel through London Bridge as well as attend the Borough market frequently. Thank you for your condolences, sincerely.

But sir, as the prime minister of our country, we need much more than condolences from you. I take it as good faith that you want the best for Malaysia. As the man with the highest office in the land, you are in the best position to ACT!

Only two short weeks ago, you were in Saudi Arabia when the dreaded Donald Trump sold a hundred billion USD worth of arms to the Saudis. You yourself admit to receiving a Saudi ‘donation’ before. Sir, surely you must know this government has one of the worst human rights records in the world. Atheism is considered a ‘crime’ over there! A world renowned activist, Raif Badawi, was sentenced to weekly whippings for merely speaking out! Women are not even allowed to drive because they may entice men into sexual liaisons! Sir, don’t you see that your ‘ally’ is just ISIS but with a UN membership card? What kind of message are you sending to our own ISIS wannabes when you ally yourselves with them?

Curtailing the rise of our own ISIS wannabes

Speaking of our own ISIS wannabes, what are we doing to curtail their rise? Do you realise, that your  ally, Hadi Awang’s, RUU 355 pushes the powers of the Syariah courts towards ISIS levels of punishment? Do you think this disgrace to human decency would stop there? Of course not! Sir, hudud laws ARE the goals of ISIS as well. The difference is, Hadi Awang does it through his gutter politics while ISIS does it with guns and bombs

The week before the now famous case of Muhammad Thaqif, you donated RM 75 million to religious schools. Was that a proper endowment, sir? Do you know where the money will go? I ask because these tahfiz schools are managed very very badly. They hire people with criminal records and a reputation for sadism to work with kids. They allow people without driving licenses to drive kids around and get them into accidents and killed. Do you think they would blink an eye at using your endowment to train young terrorists? Think about it please, sir.

In short sir, there is no point crying over spilt milk. Rather, it is time to act. The tide of Islamofascists is sweeping across the nation largely due to your own negligence at keeping them in check. Only a few hours ago, the vice president of ISMA said that Islam’s downfall came due to collaboration with non-Muslims whom he deems to be the enemies of Allah! This is a seditious statement but no doubt he will get away with it. This is what ultimately leads to violence. Mark my words, sir. Malaysia will end up being their battlefield. Act now before it’s too late.