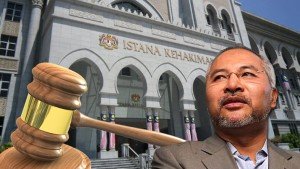 In his recent Appeal, Khir Toyo, the former MB of Selangor fought tooth and nail, to be let off, for corruption. If only he fought hard for the people of Selangor.

One of his excuses, was that he was ignorant of the law…..Who would beleive that when he was MB, he did not have access to any number of legal experts etc.

Can you imagine if you and I had said the same thing in court?

Before he was sentenced, he pleaded to do community service, by giving dental treatment to the poor, instead of a jail term. The appeal failed and he was given a 12 month jail-term

Malaysians wonder how Khir Toyo only received 12 months when others who committed lesser crimes received far longer sentences. Well, we are aware that the judiciary has been emasculated, and there are several allegations that justice can be bought, in Malaysia, at a price.

There are other things you may not know about Khir Toyo. There are allegations about study trips to various Disneyland sites around the world, he told women, who thought their husbands were straying to bring their hubby’s soiled underwear to the police so they could conduct raids on hotels and brothels, there was his astonishing hair-dye drama and of course, the infamous “Broom Award” for civil servants.

There are ways to punish poorly performing heads of departments, but the “Broom award” is humiliating and condescending.

So how come, in 2007, Umno-Baru was not interested in protecting Malay maruah, and Malay dignity? Is Malay honour a new phenomenon brought on by Najib Abdul Razak’s recent 1MDB scandal and a spill-over from the efforts to protect his reputation?