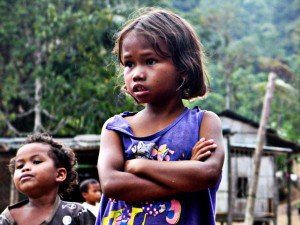 The principle behind the fire-piston or api-lantak, once widely used by the Orang Asli (OA) to make fire, was probably adopted by Rudolf Diesel to invent the Diesel engine.

Most Orang Asli make fire by two methods “friction”, rubbing two sticks together or “percussion”, striking stone on stone. The Jakun and Semalai are more sophisticated and use an ingenious device called the fire-piston or as it is commonly known in Malay, api-lantak.

Since prehistoric times, the fire-piston has been used as a means of kindling fire and is found in communities where the blowpipe is used as a weapon. The fire-piston may have developed out of blowpipe construction.

These Orang Asli understood the behaviour of gases and used precision engineering to produce the fire-pistons.

The fire-piston consists of two pieces – the plunger (piston) and the base (cylinder). The base is a hollow cylinder about 3 to 6 inches long, with a bore of 0.25 inches diameter. It is sealed at one end and open at the other. The plunger (piston) fits nicely in the base. The plunger has a handle so that a firm grip can be applied to it. A recess to place the tinder is bored out from the front of the plunger. An “O” ring made from natural fibres, moistened with water, or fat, ensures an air-tight seal.

When the piston is quickly rammed into the cylinder, the compression of the air raises the interior temperature to 300 deg C, to ignite the tinder. The piston is then quickly withdrawn and the smouldering tinder transferred to a nest of combustible material of wood shavings, dried fibres or leaves and fanned slightly, to create a flame. A proper fire can then be started with bigger kindling material.

Fire-pistons have been made from wood, animal horns, elephant ivory or bamboo. A commonly used wood is the tempinis (Streblus elongatus). Material for the tinder is fuzz from the young leaves of the tukas or Fish Tail palm (Caryota mitis). The seal or the “O” ring is from the terap fibre (Artocarpus elasticus).

From Demo to Patent

In 1871, Professor Carl von Linde, a physicist and head of the Thermodynamics Laboratory of the Technical University of Munich, toured the Far-East and stopped in Penang to deliver a talk. A fire-piston was presented to him as a souvenir, and told that it came from the indigenous peoples in the peninsula.

When the professor returned to Germany, he had a “show-and-tell” demonstration and used the fire-piston to light a cigarette. One student, a young man called Rudolf Diesel sat enthralled. Europeans then, were competing to develop the internal combustion engine and the automobile. The rest, as they say, is history for Diesel successfully applied for the patent in Britain and Germany and invented the world’s first self-ignition internal combustion engine.

Thus, it was the Orang Asli’s api-lantak technology which inspired Diesel. The fire-piston can be used one-handed, requires minimum physical effort and is not weather dependent as it can be used to make fires wherever and whenever. The principle is simple – compression of air. One thrust of the piston is all that it takes to instantaneously ignite tinder.

Research tells us that the api-lantak disappeared as matches, and later lighters, were introduced into the Orang Asli communities. There was a brief resurgence when the Orang Asli were driven deeper into the jungles during the Japanese occupation because the men lacked matches to light their much needed cigarettes.

Sadly, few, young Orang Asli are interested in the older methods. Even museums in Perak, Kuala Lumpur and Singapore have no fire-pistons on exhibit. Three are on display in a Jakarta museum.

The shame is that there is neither appreciation nor recognition of this simple yet scientific but sophisticated tool in our culture. It is left to western enthusiasts and hobbyists, wood-crafters, pyrologists and bush-crafters to be enthusiastic about this ancient heritage and tradition of the Jakun and Semalai.

That is the greater tragedy. We live in an age where access to information and technology is greater than before but in our desire to adopt modern technology, we allow memories of the past to slide past us.

Those interested in how an api-lantak is constructed may go to the following You tube videos: