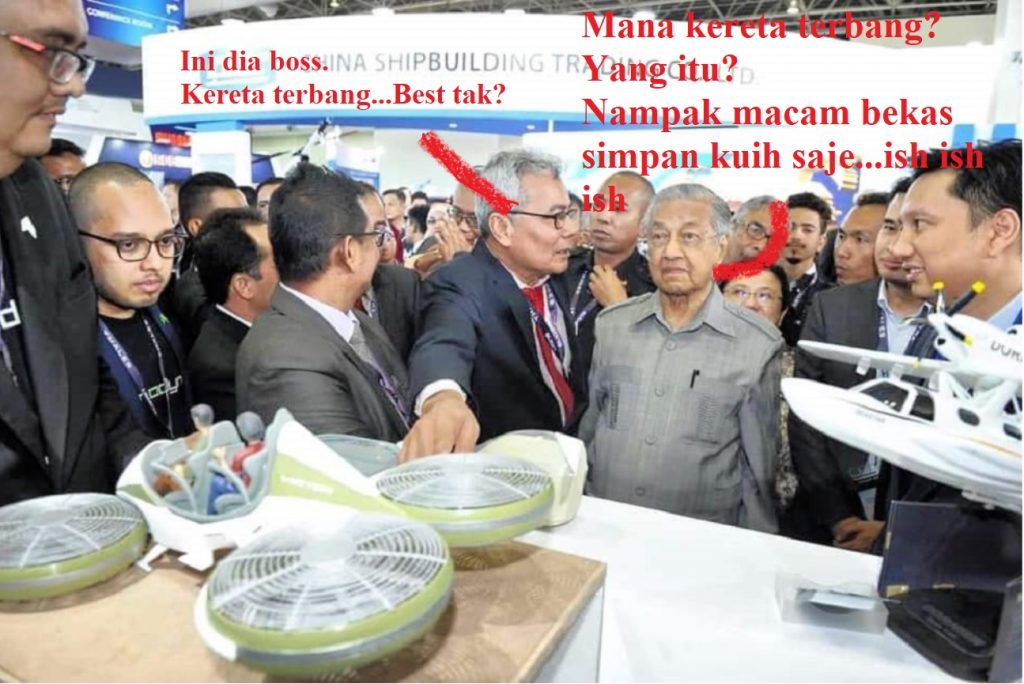 Have we been taken for a ride by the Minister for Entrepreneurship Development aka FLying Car Minister, Mohd Redzuan Md Yusof?

Today, Sin Chew Daily reported that the flying car project which has been strongly promoted by Redzuan, had never been discussed or approved by the cabinet.

The link is here. An exceprt from the article reads, “When contacted by Sin Chew Daily, a cabinet minister confirmed that the cabinet had never discussed the flying car project at all.

“Yes, he (Redzuan) has not submitted any report to the cabinet.

“As a matter of fact, many ministers do not really agree to this project,” he said.

So, why have we been wasting our breath time and money with this man and his obsession with the flying car?

If Prime Minister wants to reshuflle his Cabinet, Redzuan should be one of the first to go. He is a waste of space and time.

To make matters worse for Redzuan, here is another report in Malaysiakini about him and his daft flying car project. It is written by Wong Kah Woh, the MP from Ipoh Timur.

The first two paragraphs read…MP SPEAKS | Let me state my disclaimer first. I am writing this not in my capacity as the Vice Chairman for PAC, but in the capacity as the MP for Ipoh Timor.

As I am bound by the Standing Order of not divulging the evidence taken in the PAC, my views below are solely based on news reports, and the Parliament hansard that has recorded what the Minister of Entrepreneur Development Redzuan Mohd Yusof has said openly and officially.

Wong adds, “The Civil Aviation Authority Malaysia (CAAM) has given a no-go to the demonstration flight which was originally scheduled today.

What I can conclude from the whole fiasco, from the first announcement by the Minister early this year, until the no-go notice by CAAM, is only one word: Shameful.

If you want me to add another word, I can: Shameful…”

The flying car is NOT a government project. We thought it was!

What else does the Ministry of Entrepreneur Development do?

He is Minister of ED. ED?

All I ever hear Redzuan talk about is flying cars…nothing more!

I do not hear about start-up allocations for up and coming budding entrepreneurs.

I do not hear about how his ministry can assist young entrepreneurs or help them to source funding.

I do not hear about him collaborating with the Ministry of Education or Youth and Sports, to start youth clubs or after school activities, which promote electronics, robotics, motors, design or anything along those lines, which will spark and generate interest in young people for such things.

I think he should be chucked out of the Cabinet. I would rather have a leaner and meaner Cabinet.

Who else do YOU think should be turfed out of the Cabinet in the reshuffle? And please state your reasons.