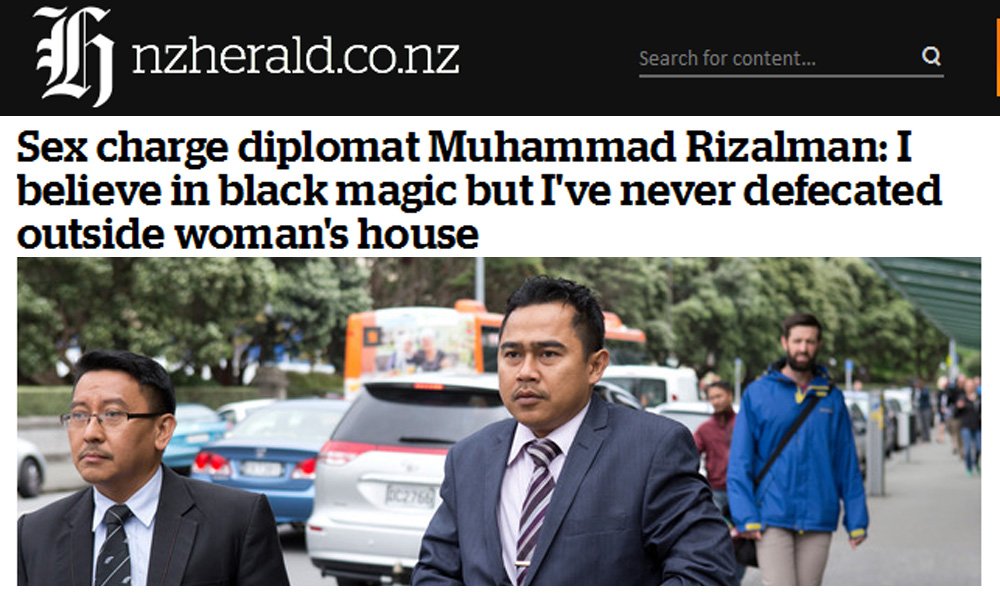 Remember him? Muhammad Rizalman Ismail, the staff assistant to the military adviser, whom reporters wrongly referred to as a military attache at our High Commission in Wellington.

Tanjong MP, Ng Wei Aik, asked Defence Minister, Hishammuddin Hussein, if further action had been taken against Rizalman after his deportation from New Zealand in November, 2016.

Hishamuddin told Ng, in a written parliamentary reply, last week, that Rizalman had been terminated from the service of the Malaysian Armed Forces (ATM) on Dec 19, 2016.

Smiling women give men the “come-on”

For the Malaysians who suffer from the ailment called “Malaysians mudah lupa”; in 2014, Rizalman trailed his victim, Tania Billingsley, home. She had smiled at him and he thought she was sending signals which he said, “It was as if she was inviting me over”.

Since when does a woman’s smile give men the ‘come-on’? Are women supposed to go around with a permanent scowl?

Without invitation, he then broke into her house and entered her bedroom, whilst naked from the waist down.

Some men don’t appear to realise that they look incredibly stupid clothed only in their shirt and socks.

We were also told that Rizalman had defecated in Billingsley’s front garden because he practised black magic and his “deposit” would cause her to fall in love with him. During his trial, he claimed that he had dropped his pants, because he had soiled himself.

Black magic or not, leaving his “mess” outside someone’s house, is a slur on Malay dignity. Far from making Billingsley “love” him, it has made the whole world revile him.

It was also revealed that he frequently pestered shop-girls and wanted sex with them. He was also alleged to be a cannabis user.

Rizalman has filthy toilet habits, and his obsession with sex, drugs and witchcraft, is an insult to Islam.

Why does Wisma Putra not properly vet the staff whom they send overseas?

Despite being arrested, Rizalman denied that he was going to sexually assault his victim.

When men are caught with their pants around their ankles, in a woman’s bedroom, few people are going to believe that they were not thinking about sex.

Having realised the consequences of his actions, Rizalman decided to invoke diplomatic immunity, and quickly fled to Malaysia

Billingsley waived her right to anonymity, to start extradition proceedings so that Rizalman would face trial in New Zealand. 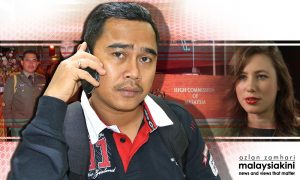 Instead of being of assistance, the Malaysian government was not at all helpful.

First. Malaysian doctors claimed that the alleged rapist could not travel, because he was depressed and was “not looking good”. Somehow, they forgot about the victim, and her trauma and suffering.

Second. When former Opposition Leader Anwar Ibrahim claimed that the government had sealed documents relating to the sexual assault, and accused it of a cover up, Hishammuddin denied the allegation and said, “For him (Anwar), everything is a cover up.”

Hishammuddin is another embarrassment for trying to protect this cad.

He and his peers in the Cabinet are guilty of a cover-up. Why does this government appear to reward failure? Like giving a second chance to the paedophile, the Mara scholar, 25-year old Nur Fitri Azmeer Nordin, who was accused by the Metropolitan Police of downloading several thousand images and videos of child pornography.

During the trial, why was a Malay interpreter  required? Are Malaysians sent to overseas missions, unable to speak fluent English?

Did the Defence Ministry conduct an investigation to see if Rizalman has been guilty of other sexual crimes?

Tragically, the victims in this sordid sex tale, are Billingsley, and Rizalman’s wife and children.

Poor Malaysia continues to soldier on, despite another humiliation to her reputation.