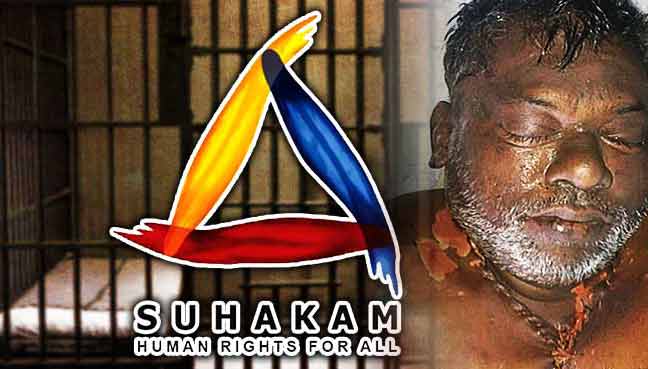 Malaysians are not stupid. On numerous occasions autopsy reports declared that men had died in police custody from sudden death, heart attack or asthma.

This nightmare, of unexplained deaths in police custody does not appear to end.

On 6 February, S Balamurugan was arrested and locked up at the North Klang district police station. Two days later he was dead.

There are many holes in the police claim that Balamurugan had died on the way to hospital, having suffered an accident in the cell.

Here is a list of some of the inconsistencies, as previously reported.

His 28-year-old wife, Natthanan Yoochmsuk, said that when she heard of her husband’s arrest, on 6 February, she immediately went to the Bandar Baru Klang police station to see him. She was denied access, but 45 minutes later, soon after a group of policement had been seen entering the station, she heard a blood curdling scream which she recognised as her husband’s.

The medical officer (MO), Elleyerance Hamid, who was asked to check on Balamurugan said that when he arrived at the North Klang lock-up, it was 12.10am on 8 February and the deceased was already stiff, his pupils dilated, specks of dried blood encircled his mouth and nose, and he did not respond to treatment.

This MO obeserved that Balamurugan had probably been dead for at least one hour and told a policeman to complete a “No sign of Life” form. He also told the court that he did not do further tests on the body, because he did not want to tamper with the evidence.

He also questioned the veracity of a photo, which the police had produced, which showed Balamurugan by the bars of his cell, whereas the MO said that when he arrived, the deceased was on the floor in the middle of the cell.

Why did the police phone Balamurugan’s wife, on the morning of 8 February, and tell her that her husband had suffered an accident, when he had, in fact, died, the previous night, from alleged torture, in the cells?

Why did the autopsy reveal that Balamurugan had died of a heart attack?  Dissatisfied with this, his family obtained a second autopsy, which revealed evidence of blunt force trauma and multiple injuries.

Policemen said victim was “faking it”

A 16-year old witness, detained at the same time as Balamurugan, claimed to have seen him being slapped and punched in the chest and abdomen. Lawyers are now opposing the re-arrest of this teenager, to prevent witness intimidation.

Why were dummy CCTVs installed at the police station? Were they to deter policemen from were stealing, instead of stopping possible abuse of the detainees? The issue of non-functioning CCTVs has cropped up too many times, as in the mysterious deaths of Teoh Beng Hock and Ahmad Sarbani.

Why was the Standard Operating Procedure (SOP) for police detainees ignored?

No political will equals more deaths

The modus operandi for pulling the wool over our eyes is this: First, a cold blooded killing, is swiftly followed by a cover-up, to disguise what actually happened. When the victims’ families probe deeper and demand answers, denials swiftly follow and scapegoats are found.

Without political will, to set up an Independent Police Complaints and Misconducts Commission (IPCMC), no progress will be made. More deaths in police custody will follow.