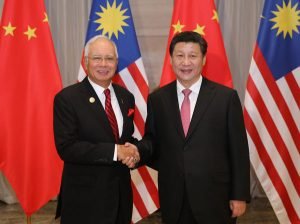 Why do the critics, from Umno-Baru and PAS, fear the ashes of the former secretary-general of the Malayan Communist Party (MCP), Chin Peng? Is it because they think his ashes could revive communism in Malaysia?

No! That cannot be the reason because no-one is interested in communism, especially as the People’s Republic of China (PRC) Chinese are themselves  more capitalist, and probably more successful entrepreneurs, than the Americans.

Moreover, Umno-Baru leaders fall over themselves to do business with communist China, and sold swathes of Malaysian territory to PRC companies. (And the PRC navy lands boats on the uninhabited islands off Sarawak eg James Shoal, and conduct manoeuvres and drills, and our navy dismisses the reports).

Communist or Red China, aka the PRC, is one of Malaysia’s biggest trading partners. More billionaires have been  made in the PRC than elsewhere. They manufacture products cheaply, export them are bargain basement prices and still make a profit. The PRC Chinese travel widely and boost tourism in many countries. They make model capitalists and do not project the image of a drab communist in grey uniform, quoting from Mao’s Little Red Book.

On a separate note, World War II witnessed soldiers from the Imperial Japanese army killing more people – Malayans and other foreigners, than Chin Peng. Across Asia, millions died from Japanese brutality, and over a six week period, 200,000 Chinese perished in what is known as the Nanking massacre.

Despite their barbarism, a memorial has been erected at a bridge in Alor Star, to commemorate the “Japanese heroes“. All their war crimes appear to have been erased from our memories.

Those who lived through WWII, recount numerous beheadings and torture, mainly of Chinese Malayans. Sybil Kathigasu, a Eurasian nurse from Papan, who supported the resistance effort against the Japanese, treated wounded guerillas and was later captured, tortured and jailed, by the Japanese.

Girls were abducted and placed in Japanese army-run brothels to service their soldiers (comfort women). Men were sent to work on the death railway; and yet today, the Opposition parties of Umno-Baru and PAS, fear Chin Peng’s ashes and demand an investigation into their return to Malaysia.

Surely, the police have better things to do, than waste valuable resources investigating the people who returned Chin Peng’s ashes to Malaysia.

The communist ideology is not everyone’s cup of tea. It is like a cult, almost like a religion, with a strict and rigid observance of rituals, in dress, greetings, mannerisms and salutations.

The British outlawed Chin Peng’s activities because he wanted to empower workers, in other words, the unions. After WWII, Britain needed to increase the production of rubber and tin, to help finance the huge debt left behind by the war. Crippling strikes, increases in pay, improved working and living conditions, in the mines and estates, were the last thing on their minds.

So, what is the real reason of banning Chin Peng’s ashes from being interred in his family vault, in Sitiawan?

We are told that his ashes have been scattered in the sea off Lumut and the jungles in the Titiwangsa mountain range, so there is no chance of a shrine being erected to pay homage to Chin Peng or the MCP.

Is the scrutiny over the ashes primarily because he was the leader of an army that was banned by both the British and the Malaysian governments?

Few Malaysians are aware that during WWII, the British commandos in Force 136 fought alongside Chin Peng to repel the Japanese forces. They gathered intelligence and sabotaged Japanese army positions.

Umno-Baru and PAS politicians may claim that the return of Chin Peng’s ashes is an insult to the memory of the Malaysian security forces who were killed in ‘The Emergency’, and a humiliation for the veterans who are still alive.

He said, “To me in any war, in an armed conflict, big or small, there must be casualties… If you say the army, police personnel and civilians suffered the most, ask the MCP (and) they would say the same thing – ‘what about me and my people?’...”

The history books will probably not mention that Chin Peng helped to liberate Malaya from Japanese aggression, and fewer still will state  that Chin Peng, who opposed colonial power, had issued a  challenge to the Tunku, at the failed talks in Baling, in December 1955. Twenty months later, we achieved Merdeka.

So what could be the reason for the criticism of the return of Chin Peng’s ashes?

The most likely explanation is that the ashes could be used as a propaganda tool with which Malay nationalists can foment discord, and whip-up the fear that Chinese communists would attack the Malays.

Umno-Baru/PAS need to continue to promote the myth, that they protect the Malays and defend Islam.