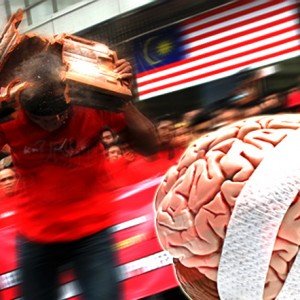 The so-called red-shirts need to adhere to Health and Safety once in a while.Â  Prolonged practise sessions which involve the smashing of roof and clay tiles on one’s head, have resulted in their members having impaired brain function.

When all of Malaysia notices the endemic corruption crippling the country, and a so called RM2.6 billion donation as suspect, they see nothing wrong….

The educated Education Minister alleged that DAP is funded by foreigners – Jews and CHristians……and yet they see nothing wrong with an Arab donating RM2.6 billion, to the PM’s coffers…..hahahaha.

Perhaps, because the Arab is a Muslim…..so these Umno-Baru red-shirts think it is ok…..

Hmmm….wasn’t it another Arab – a Saudi to be precise, who was a wealthy benefactor who gave up on his billionaire lifestyle and later denounced his wealth, and lived in a cave in Afghanistan and saw his last daysÂ  behind closed walls in a Pakistan village? Just because the benefactor is an Arab and a Muslim, does not mean he has the best interests of Malaysia at heart.

Anyway, here is why I think the Umno-Baru chief who led the public demonstration is more intellectually challenged than I thought was possible.

Photo credits to The AntDaily