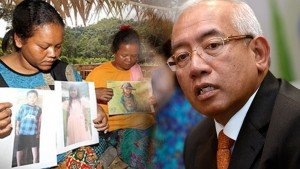 The Education Minister Mahdzir Khalid is in an untenable position and should resign.

The Orang Asli children didn’t just run away, for the hell of it. They were genuinely petrified. The answer for their disappearance lies within the four walls of the school hostel.

The stories of the ill treatment of the Orang Asli children, and the deplorable neglect of the various Orang Asli communities, have been documented, before.

Most children would be wary of spending a night in the bush, without the presence of an adult, the convenience of a tent, and provisions. Despite the discomfort and potential dangers, these children refused to return to the school.

What lies within the walls of the school hostel, and triggered their tragic decision to leave? Was it the teachers, the headmaster, fellow pupils, or Â the non-academic staff?

The announcement, by Mahdzir, to set-up a special committee, is too little, and too late. In addition, two other ministries bear some of the responsibility.

So, why did they look for the children in the Orang Asli villages, about 41 km away? The children were found less than a kilometre from the school.

Seven weeks after the disappearance, Azizah said that her ministry would offer counseling and monetary aid, to the families, only “if these were needed”.

A few days later, Minister of Women, Family and Community DevelopmentÂ Rohani Abdul Karim claimed that the families had already been given regular assistance.

So, who is right? The minister or her deputy ?

Finally, the Minister of Rural and Regional Development Ismail Sabri Yakob has neglected the welfare of the Orang Asli community. He is infamous for blaming Chinese businesses for failures in Malay entrepreneurship. Who will he blame this time?

The three ministers, Mahdzir, Ismail Sabri and Rohani, should all resign, for the dereliction of their various duties.

As Education minister, Mahdzir is clueless about what happened in this sleepy hollow, deep in the interior of Kelantan. The five deaths happened under his watch. He should be the first to quit!

The full article is http://www.theantdaily.com/Main/Education-minister-must-quit-over-Orang-Asli-fiasco