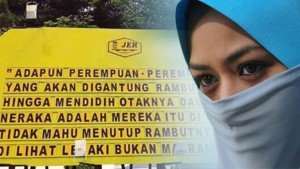 When will Malaysians, especially Muslim-Malays, realise that religion is a personal matter?

In Malaysia, men, in particular Muslim men, have an uncanny ability to patronise and preach to women. It is worse when the authorities feel the need to weave religion into their professional roles.

On February 25, it was reported in the mainstream papers that the Batu Pahat Public Works Department (JKR) had removed a JKR signboard which reminded Muslim women to cover their hair.

The notice warned Muslim women of the punishment they would receive should they fail to cover their hair. Photographs of the JKR notice had been circulating on Facebook and WhatsApp.

Members of the public had complained about JKR’s action, saying that erecting notices with a religious connotation, was out of their jurisdiction.

One makcik said, “Will JKR repair the potholes in front of my house instead of being a ‘mak-sebok’?”

The response from the public must have taken Batu Pahat’s JKR engineer, Alias Mohd Zaid, by surprise. He claimed that they only had good intentions, when displaying the notice and said, “We only wanted to share some good advice with the community, as it is better than leaving the signboard bare.â€

Alias Mohd Zaid knows better now. If he wanted to share good advice, how about one advising Muslim men to treat their wives with respect. Perhaps the polygamous husband should be told to treat all his wives, equally well.

A warning about the immorality of corruption would not go amiss. Some useful advice would be to warn the public not to waste water, or the reasons for conserving energy, or the importance of recycling waste.

Why didÂ JKR have to pick on religion? And why pick on Muslim women? Haven’t we enough busybodies (mostly men), the ulamas, Jamil Baharom, PAS and various religious bodies which wade in and scold Muslim women for umpteen reasons, like wearing the wrong clothes, pursuing the wrong profession and laughing wrongly?

The state Public Works, Rural and Regional Development committee chairman Hasni Mohammad claimed that the matter had been resolved. He explained that the signboard, which had been put up on Jalan Bakau Condong,Â  in Batu Pahat, was designed for a religious event which JKR had organised, last January.

He said, “It was all right for them to place the notice for the function, but they should have removed it, especially since the board clearly belonged to JKR with its logo at the top.

â€œAlthough the message meant well, it did not represent the function of JKR.â€

He is right, but the matter should not have occurred, in the first place.

Many people will continue to ask why Malay, Muslim men are keen to “control” their women with reminders about their hair and their behaviour?

The gymnast, the beauty queen, the scholarship holder, ordinary schoolgirls, ordinary professionals, have all been subject to intense scrutiny by sanctimonious Malay men.

Are Malay men so insecure that they have to target Malay girls? On the other hand, are Malay, Muslim men so well behaved? Even the â€˜Chosen One’ cannot keep his hands off donations.