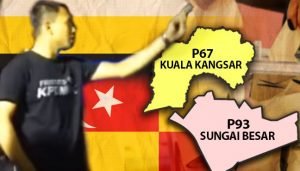 For those who do not know the story.

A by-election was planned, when the MP for Kuala Kangsar died in a helicopter crash last month.

Umno-Baru nominated the MP’s widow, Mastura Yazid to be their candidate. We do not know if her arm was twisted, or if they could not find a more suitable candidate. We know the following.

Umno-Baru wants to use the sympathy vote to win this by-election. They did this before in 2010, with Linda Tsen, the widow of the Batu Sapi MP in Sabah.

According to the deputy PM, Zahid Hamidi, Mastura is “very experienced” to become a politician because she accompanied her hubby on many of his visits to meet the people.

In that case, the self-styled First Lady Of Malaysia, (FLOM), aka KakRos, has been on more trips than any politician’s wife, visiting the electorate, and if anything should befall PM Najib, then, KakRos will be your PM.

Who would dare oppose KakRos’ candidacy or challenge her for the role of PM.

If push came to shove, would Zahid dare wrestle the crown from KakRos? How badly do they want to be top man (or woman)?

Anyway, back to Mastura…

We were told that the Umno-Baru candidate, the widow Mastura, wanted to observe “eddah”, or the 130-day mourning period.

The magnanimous Umno-Baru consulted the religious ulama, the colourful Mufti of Perak – he of the “sex on a camel fame”, and other religious scholars. If they had the hot line to God, they would probably have told us that, too.

Wow! If only every Malay widow in Malaysia and the world, could observe this 130-day mourning period. Malaysian economy would grind to a halt.

Malay women already have a hard time trying to hold down a job, with employers saying:-

(i) single girls want to get married,

(ii) when they get married, they want to get pregnant,

(iii) when they give birth, they want months off to take care of baby,

(iv) when they have kids, they want time off to nurse their sick children,

(v) when hubbies take a second (or third or fourth wife), they want time off for depression… etc

Umno-Baru did not tell you this.

They do not trust Mastura with the questions people (like me and you) would ask her.

Such as the ones I put here in Malaysiakini.

Some of the questions are: What is her view about (i) Najib and the millions of ringgits which Jho Low deposited into his personal account, (ii) the 1MBD, (iii) hudud (iv) Najib’s role in bringing down a 134-year-old Swiss bank, (v) is it right that Shahrizat Abd Jalil, the disgraced former Minister for Women, should be awarded the Tan Sri-ship and (v) what she thinks about KakRos’ jolly to Turkey using taxpayer’s money?

A few minutes ago, a Bernama tweet said that Mastura was going to consult the religious scholars to see if she would be allowed to vote on 18 June.

If Mastura wants to go out and vote, then she should have no problem coming out to canvass, face the electorate and not allow her political masters to make a mockery of her. The people of Kuala Kangsar want to know what her plans are for the constituency.

She has already broken her 130-day mourning period, with a press conference (PC) in her house yesterday… but we were earlier told that during her “eddah” she would not face the public.

So, she has already broken one election pledge.

At the PC, a reporter asked her about hudud and she said… “oh let me think about this after the by-election. I want to focus on KK.”

Hell no! You are going to be MP and you cannot prevaricate. Also, you know hudud is a loaded question but as a politician, you must think on your feet and not bide your time.

Moreover, KK issues are tackled by a KK Adun (local state assemblyman) and these will mostly be about blocked drains, rubbish and neighbourhood noise.

Immoral of the story.

The thing is, Umno-Baru wanted you to feel extra sympathy for Mastura and to think that she is extra pious. (Eddah, according to Muslim jurists, merely refers to the period during which a woman may not remarry following a divorce or her husband’s death. It has nothing to do with mourning or seclusion.)

During Ramadhan, Umno-Baru is using extra helpings of piety to pull the wool over our eyes.