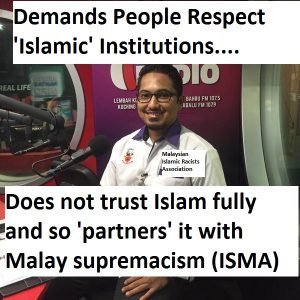 The term â€˜Islamofascismâ€™, quite understandably, has raised strong reactions across the board. It is understandable because the word â€˜fascismâ€™ is not a nice label to wear.

Isma activist, Salman Abdul Rahman, took great issue with this â€˜narrativeâ€™ (I have not seen any narrative being offered thus far, only a theory) although he did not offer a single counter argument. Perhaps he did not understand the concept.

The theory itself postulates that, within the Islamic tradition, there exists a stream of thought characterized by oppression. This stream of thought is perhaps the most comprehensive system of oppression on earth. It seeks to control every aspect of our lives.

Emphatically, it has nothing to do with the Fascist movements in the West of the previous century. Salman failed to understand the multi-dimensionality of words which is unsurprising considering he comes from an â€˜intellectualâ€™ tradition known for its literalism and inability to appreciate nuance.

Why do I use the term â€˜Islamofascismâ€™?

Although I explained it at length in my theoretical exposition (available to read on the Critical Muslimâ€™s website), I feel it is only fair for me to briefly describe it here: I use the term for one reason â€“ as respect for the Islamofascists! This may come as a surprise but let me explain.

Islam is a human tradition with a single divine element â€“ the Quran. Beyond the Quran, everything is indeed interpretation of the Islamic priestly class. I mentioned the oppressive stream of thought above. What makes it oppressive? Teachings such as:

1. Imposing limitations on womenâ€™s freedom of movement. She must seek permission from her husband to even leave the house.

2. Denying women the right to marry whomever they choose without their father (or indeed their sonâ€™s) permission.

3. Denying women the unilateral right to divorce her husband, which ironically the husband has full rights so to do.

4. Forcing children to perform Islamic rituals. Instructing they be beaten for failure to do so.

5. Indeed the worst of these is the punishment for apostasy where a personâ€™s right to believe or indeed disbelieve is punishable by death.

These are only the tip of the iceberg.

The theory of Islamofascism shows a whole system of oppression. Many Muslims would even disavow these teachings calling them unislamic and I agree with them â€“ they are indeed opposite to what the Quran teaches. In any case, they are â€˜fascistâ€™ in nature. However, the people who uphold them claim to be doing so due to their understanding of Islam. I cannot deny them that right because I do not own the Islamic tradition. Hence, I acknowledge that they have a right to be called â€˜Islamâ€™, but to be balanced, I call them â€˜Islamofascismâ€™, because I cannot acknowledge that they are â€˜Islamâ€™ in essence, merely by name.

Salman claims that some thinkers including myself oppose any kind of Islamic institution. This is simply untrue. If I found any institution to be islamic (that is, characterized by the quality of bringing salam or peace to self and society), I would whole heartedly support it.

There is an organization called â€˜The Children of Adamâ€™ in London which feeds the homeless every Sunday evening, without fail.

They donâ€™t ask if the victims are Muslim or not, nor do they solicit funds from the UK government. They are simply people (mostly Muslims) who bring food and disburse them to the homeless. They are to me an islamic organization and I wholeheartedly support them.

Compare this with JAKIM. They receive a budget of RM1 billion from the government for which they have still not accounted, despite promising to do so almost a year ago. That in itself is an unislamic act.

Furthermore, they target movements which do not agree with the mainstream Islam which they practice (which could be Wahabism these days, who knows!). Moreover, they go beyond the Quranic concept of halal and even try to suppress food which sound haram.

Is JAKIM an islamic institution? No! If they wanted to be one, for a start they would need to return the billion ringgit budget and act as a volunteer organization. That would truly follow the Sunnah.

And thatâ€™s just JAKIM, we have not even gone into Tabung Haji, Tahfiz institutions with their covered up sex scandals, various state Jabatan Agamas with their skodeng activities and so on.

The Islamic priesthood is simply an economic channel to keep the intellectually lazy and disconnected from reality folks rich by offering counter productive services.

But perhaps the worst of these is ISMA itself. Isma, unlike most other Islamic institutions, has combined Ketuanan Melayu alongside their Islamofascism.

They are a confused bunch. They do not trust the promise of Allah to bring them peace and security by simply believing and acting righteously (Quran 24/55) and so must rely upon simple vulgar racism to do the trick.

Ironically, last week, their own activist Omar Kasim quoted the Quran (2/284) which opens with the ownership of Allah over the heavens and the earth.

He neglected to mention that he believes that only with a proviso â€“Tanah Melayu. Malays own that. Allah and Malays are now partners, according to ISMAâ€™s perverted thinking.