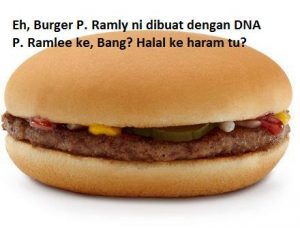 The Pretzel Dog issue made world news last week. I was surprised when I saw the news on Daily Mailâ€™s website. Daily Mail is one of the top tabloid newspapers in the world so when they published this news, you can be sure that the world knows about it. And of course, whenever the news was shared, it was with accompanying mirth and glee. Once again, Malaysia has become a global laughing stock. A few years ago, it was due to the â€˜Allahâ€™ incident when non-Muslims in the peninsular were prohibited from using the word. Back then, even the Saudis (who think that women driving cars would have vibrating vaginas and become promiscuous) laughed at us. I was even chided by a cheeky colleague that â€˜Bingo Meccaâ€™ (a famous UK-based gambling chain) was not actually Mecca and I should not attempt to do my hajj there! Ha ha, very funnyâ€¦..

What about the Ramly Burger?

Aunty Anneâ€™s Pretzel Dog has been around for a few years without any problems. Forget Aunty Anne, Ramly Burger has been around for decades also without any problems. Having been a fan of such fare, I have yet to see any Malay person ask Ramly burger stallholders,  â€˜bang, ni hot dog ni daging anjing ke bang?â€™! Such is the effect of global language and culture. Words even foreign to oneâ€™s native tongue can be easily absorbed. I doubt you will find any global citizen wondering if the â€˜world wide webâ€™ was spun by spiders!

So what is really going on? I tend to agree with Jahabar Sadiqâ€™s piece in Asia Correspondent where he suggested that JAKIMâ€™s move, far from being stupid, was actually quite sinister. JAKIM acts as the moral guardian of Muslims and by â€˜shieldingâ€™ Muslims from these â€˜confusionsâ€™, they will thereby gain even more power and influence. Muslims who refuse to conform to this halal rule will be seen as lesser Muslims or not at all.

However, JAKIM miscalculated their move. The intellectual level they displayed was totally made fun of by the Malaysian social media. This time, the outcry came from the Malays themselves. They were simply outraged that JAKIM could demand such a thing. The fact that this debacle was being spread around the world simply made it even more humiliating. Even Tourism and Culture minister, Nazri Aziz joined in the foray when he decried the Pretzel Dog incident to be the work of ignoramuses! Even the usually facile Nik Abduh said that the name of a food has nothing to do with its halal-ness. An American Islamic scholar actually called JAKIM ignorant for refusing to grant halal status on these grounds. Those were the straws that broke the camelâ€™s back.

A few days later, Jamil Khir, the minister in the Prime Ministerâ€™s department who is charge of JAKIM (who was also alleged by whistleblowers to have used funds from a foundation to help orphans to play golf and have a shopping spree in the USA), came up with following statement â€“ that the name pretzel dog has nothing to do with JAKIMâ€™s refusal to grant halal certification to Aunty Anne.  JAKIMâ€™s halal director, Sirajuddin Suhaimee, claims that he made a general remark about appropriate names and that his statement was taken out of context. This is very strange considering that the context was a conversation about Aunty Anne and its product, the Pretzel Dog! Why had the other reasons for the halal cert refusal not emerged until now? The above reasons make this backtracking look very incredulous.

In 2016 Malaysia, Prime Minister Najib Razak explicated a budget in which education and health suffer from budget cuts. However, last year the Islamic priestly class got to have their RM 1billion without any need to account for it. Even the Sultan of Johor had to ask why this was the case! But this is how things are at the moment. RM 1 billion or no, the issues raised by JAKIM are beyond facile, they make the Muslims look positively moronic. The good news is though, that JAKIM is not invulnerable, they had to backtrack when enough voices were raised. We need to remember this for the future and work towards minimizing their budgets and their roles. We donâ€™t need a body like JAKIM to support our faith.

Update: the accompanying meme refers to the â€˜Burger P.Ramlyâ€™ affair where a pork burger was ostensibly named after our national legend. Muslims are once again confused, apparently. At least the consumer association folks didnâ€™t think the burger was made out of meat from P. Ramleeâ€™s DNA.