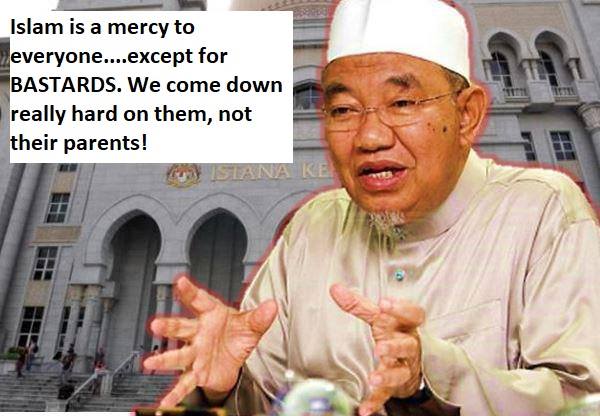 The irony of Islam today is that its priesthood act in direct contradiction to its spirit. The reason for this is simple: the ancient priests of Islam adopted pre-Islamic law (and called it ‘Sharia’) while abandoning the Quran altogether both in letter and spirit. The apostasy law is the most glaring example of this. While the Quran gives unequivocal, unconditional freedom of religion, these priests still believe that they are ordered by God to kill apostates. At best, they can let apostates live, but only if they shut up and do not preach to Muslims. The priesthood fears losing its customers, it seems.

The latest example of the Islamofascist priesthood is on the ‘bin Abdullah’ issue. According to a 1981 fartwah, an illegitimate child whose mother is Muslim would be given the patronymic ‘bin Abdullah’ in his birth certificate. This is the most inconsiderate fartwah because once the child’s friends know there is no actual Abdullah, he or she would be stigmatised. In the case where the National Registration Department insisted on doing so, the court of appeal has overturned their decision. Judge Abdul Rahman Sebli said that the court was not tied to any fartwah council and rightly so. I highly applaud his decision.

Naturally, this enraged Malaysia’s Islamofascist fraternity. Perak’s Mufti, Harussani Zakaria, a man who does not believe in marital rape, insists that the Court of Appeal has no right to go against ‘Islamic law’. Of course, he conveniently forgets to tell you that ‘Islamic law’ is really a bunch of man-made rules even its priesthood cannot agree upon. Case in point: his fellow Mufti, Mohd Asri Zainal Abidin who disagreed with the fartwah, rightly showing that there are exceptions. In this case, MAZA is quite right by appealing to the spirit of the law.

No less merciless is the Muslim Lawyers Association, another useless organisation which exists simply to make life harder for Muslims. On this issue, they said “If a father is not legitimised under shariah and he has a daughter, her marriage might not be recognised if the father acted as the ‘wali’ (guardian)”.

The stupidity of this remark is unbelievable. Does God come down from the sky to legitimise marriages? No, it is the Islamofascists themselves who decided that without wedlock, a child cannot patronymically bear the father’s name. God never said a thing about it. And what about requiring a ‘wali’ for marriage? Once again God never mentioned it. They created the rules and go into fits of rage when others refuse to follow it!

Muslims need to realise that we can remove these silly rules from ancient Arabic tribal laws. They are grossly unfair to the children and terribly supportive of a toxic patriarchy. One Islamic school goes so far as to say a father may wed his illegitimate child! Such perverted thinking only shows these people are unintelligent literalists and need to kept well away from us!