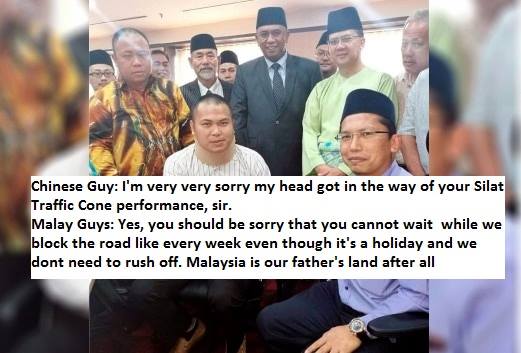 What a travesty of justice! The victim of last week’s incident where a man and his car were attacked by mosque goers has apologised for honking his car since he could not get through the jam!

It is a weekly problem in Malaysia. Mosque goers would park their cars wherever they liked, giving the excuse they are attending the Friday prayers. Roads would thus be blocked and too bad for anyone who had to rush through.

This is what happed to the victim of the Surau Austin Perdana attack, Toh Chai Eun, 28. He had an urgent matter to attend to, got frustrated and honked his corn. He was then attacked by mosque fanatics who cause him injury. One of these is the now infamous ‘Panglima Traffic Cone’ (traffic cone warrior).

What’s really appalling is that Mr Toh has now apologised, but his attackers are nowhere to be seen! Granted that he was disrespectful, but the crimes of his attackers are far worse. Where are they in this report? Will they be named and shamed? It was very decent of Mr Toh to apologise, but where are the real criminals?

Malays find it difficult to admit their faults

This is another case of ‘maruah Melayu’ (Malay pride). The Malays have a serious issue with admitting their faults, especially to others.

This is why paedophiles can be given second chances and criminals are hired to be wardens of residential schools. Because we simply suspend our rationale when it comes to ‘fellow Malays’.

I wait for the Surau Austin Perdana culprits to be named and shamed. What’s more, I await for the government to present solutions to the Friday prayers congestion issues. Exercise some governance please, don’t just defend the non-existent ‘maruah Melayu’ to win votes!

To Mr Toh Chai Eun, I thank you for your graciousness. You are a decent Malaysian.