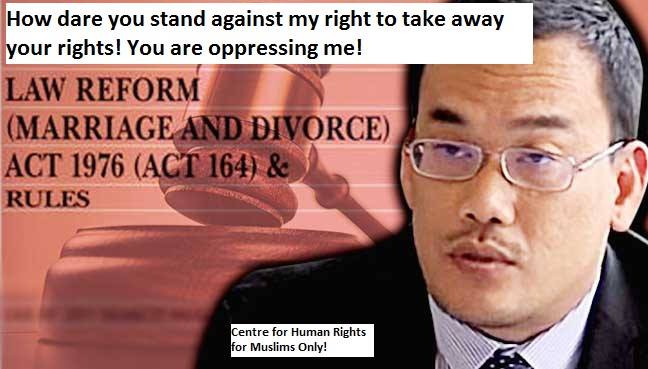 Let me give you an analogy so you may understand the situation: Imagine a snatch thief. You know, the kind on motorcycles who snatch your purse as you walk along a street. They can easily cause you to fall and really hurt yourself or even die. Quite clearly an infringement on your rights, is it not?

However, imagine if the snatch thief now wants a law to protect him when he commits the felony! With that law, he can snatch anything and if you complain, you’re infringing on his rights! Any sane person would consider such a proposition utterly inconceivable.

Not this Islamofascist think tank though – they actually consider it unfair that Malaysians want to take away their rights to oppress you!

The issue is about unilateral conversions. If any non-Muslim couples are on the road to divorce, one of them can simply convert to Islam and thereby bring in the Syariah courts.

They can then unilaterally convert their children to Islam and win custody. How unfair is this! The other (non-Muslim) parent loses out because she refused to sell her faith. This is what actually happened with the Indira Gandhi case.

Azril Mohd Amin, chief executive officer of the aforementioned Islamofascist think tank, ‘Centre for Human Rights Research and Advocacy’ (Centhra), pointed to the requirement for consent of both parents for conversion of a child to Islam.“This is discriminatory against Muslims as conversion to other religions requires no such joint consent,” he said.

Muslims have no freedom of religion

Of course conversions from other religions do not require consent, because other religions are not legislated! All Malaysian have freedom of religion – except Muslims. If you are born Muslim or convert to the faith, you are put under the jurisdiction of the Syariah courts. Getting out of that is near impossible. They definitely do not want to lose their numbers.

Azril considers it unfair that both parents must consent to a child’s conversion. In other words, he does not mind if a non-Muslim parent loses her rights as long as the child is unwittingly converted to Islam! This is nothing short of oppression. The snatch thief demands his right to your purse. Standing against his right is oppressing him. That is Azril’s logic in a nutshell.

Write to your MPs and urge them to reform the Marriage and Divorce. If you are Muslim, do it for Islam because Allah instructs us to establish justice, even if against ourselves (Quran, 4/135, 5/8).