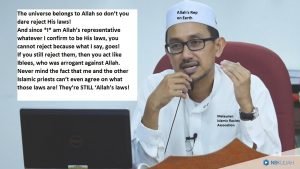 Farouk A Peru, writer and Islamologist, gives us a brief description of the term “Islamofascism”, its academic use and its origins in Malaysia.

In the video clip below, he said, “The dominant form of Islam in Malaysia, is the Islamofacists'”, and explains that they use the Islamic tradition and the Law of Apostasy to express their fascism.

For him, Islamofascists are characterised by their repressive rule, and their need to “control” other people.

He warns us that we do not have freedom of religion in Malaysia, despite unconditional freedom (in Islam) and the constitution.

Describing Islamofascism as the result of the departure, from the authentic values of the Quran, he stresses that “…the Quran gives us the freedom to think, the freedom to disagree, to freedom to choose, even if it is on another path. It is not for others to govern us….”

Warning that Malaysia is experiencing a good deal of Islamofascism, with the Wahhabi influence creeping up on us, Farouk advises the Malays to be more critical in their thinking, to check their facts, refer to sources and form discussion groups.

In simple terms, he outlines the early roots of Islamofacism, in Malaysia, introduced when Islamisation was imported, after the Islamic revolution of Iran.

Although he did not coin the word “Islamofascism”, he used it to write a theory of Islamofascism, and the various branches of this system.

He is aware that Malays, who with their uncritical mind, their fear of Islam and of becoming kaffirs, simply allowed themselves to be governed by the Islamofascists.

The test for an Islamofascist

The simple test to find out if someone is an Islamofascist or not, is to ask that person, “Are you willing to allow people to deconvert from Islam?

Note: Farouk A Peru, is a writer, columnist and Islamologist. Please check his other work on this website.

Farouk’s progressive thinking, and his desire for Muslims to critically analyse their thoughts and actions, has often led him on a collision course with the Islamofacists in Malaysia.