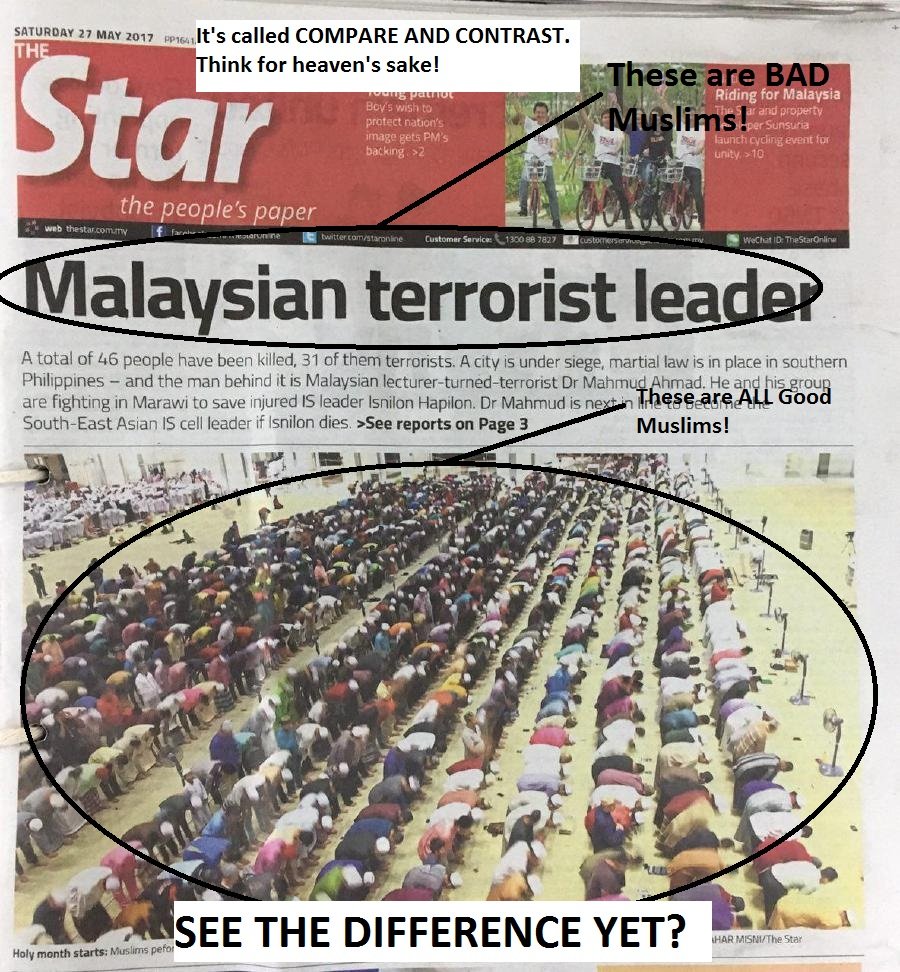 Of course you already know about the suspension of The Star’s editors Leanne Goh Lee Yen and Dorairaj Nadason. Their ‘crime’, if it can so be called, was nothing more than placing two pieces of news items together on the Star’s front page on 27th May. A few other local newspapers have similar placements but with no repercussions. Sadly, people with agendas refuse to see this.

Only in the last few weeks in Saudi Arabia, you rightly spoke on the increased danger of ISIS to the world. I cannot agree more although, I must confess, I found it inexplicable that you would ally yourself to a government who are, philosophically speaking, not far removed from ISIS themselves! But that is another matter.

For now, let us focus on the issue of Islamofascism (the strand of thought within the Islamic tradition which practises systemic oppression).

Islamofascism is a disease in our great nation, manifesting in the form of sadistic Tahfiz school wardens to intellectually bankrupt political parties who may potentially fine a person RM100,000  for a mere khalwat offence (even they don’t know what they’ll do next!). Today, Malaysian students have been questioned in Manchester in connection with Monday’s terrorist attack. Even though they were released, they must have had some association with the act or its perpetrator. Does that not scare you, sir?

This disease is ruining our inter-communal relations, sir. I grew up with the slogan of ‘masyarakat majmuk berbilang bangsa dan agama’ and thoroughly enjoyed my Malaysian childhood and adolescence. However, thanks to Malay Ultras and Islamofascists (one confused NGO even peddles both!), this Malaysia has long since been eroding. Today’s miscarriage of justice can only erode it further. Our fellow Malaysians are looking at us with great bemusement wondering what other stupidity we’ll come up with next!

Please look at the infamous front page again. You will see that it is only offensive if one is so weak in his conviction that he thinks every little thing is a slur against him. The Quran has a label for people like these and it is not a nice one.

A friend of mine rightly asked, why not see it as a contrast – the headlines mentioning a few stray Muslims whilst the huge picture showing hundreds of Muslims being spiritual. I see this perception as a perfect antidote to hate. While Islamofascists are wrecking our lives, the vast majority of Muslims are seeking closeness with Allah. A truly poetic answer.

Sir, do not allow the local Islamofascists to have their way. These people are the most small minded creatures you can find who will do anything to score political points, even ignoring the Quran’s own prohibition against suspicion. Gratifying them would only lead to greater demands.

You must know that with these types, their sadistic thirst for power is unquenchable. You have the power to stop this unconscionable witch hunt and ultimately restore Muhibbah to our beleaguered nation. I hope you will do so.